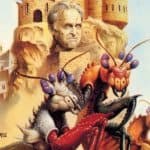 During an interview with Collider, filmmaker Gore Verbinski (Pirates of the Caribbean) has revealed that he’s set to direct an adaptation of Game of Thrones author George R.R. Martin’s 1979 novelette Sandkings, which is being scripted by Dennis Kelly (Utopia). “One of the screenplays is based on a George R.R. Martin short story called Sandkings, […]