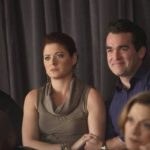 During a recent interview with Flickering Myth about the upcoming home video release of Molly’s Game, actor Brian d’Arcy James was asked about the potential of a Smash revival, to which he revealed that he’d love to return to the show if the opportunity presented itself.  The short-lived NBC show, which was executive produced by […]