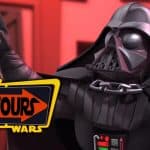 In the latest episode of Whatever Happened To?, we look at one of the biggest casualties of Disney’s Lucasfilm acquisition, the animated comedy series Star Wars Detours… In 2009, Star Wars creator George Lucas announced to fans that a new animated series was in development – one that would take the franchise in a completely […]