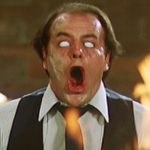 Scanners, 1981. Directed by David Cronenberg Starring Stephen Lack, Jennifer O’Neil, Patrick McGoohan, Lawrence Dane and Michael Ironside. SYNOPSIS: A man with extraordinary psychic powers is recruited by a secretive agency to hunt down others with powers similar to his own. Mind readers, mediums and mystics, the world is full of people claiming to possess […]