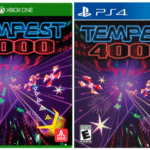 Back in 1981 games developer and genius Dave Theurer released upon the world – via Atari – Tempest, a frantic 3D wireframe shooter that required all your gaming skills to be wired to perfection.  Now near forty-years later Jeff Minter – fellow gaming genius – of Llamasoft whose catalogue reaches back decades, though more recently […]

Russian developer and publisher, Herocraft have announced that their pirate RPG, Tempest: Pirate Action RPG, has made the move from PC and is now available on Android and iOS devices.  Since the game’s release on Steam in August 2016 over 50,000 players have explored the high seas and plundered to their heart’s content.  Now with […]

We leave the Pleasuredome from Frankie Goes To Hollywood, setting our sights on Number #70 in the Your Sinclair Top 100 games and it’s rather a bizarre little number called G-Force; rather disappointingly it’s not the kids cartoon from the early 1980’s. G-Force arrived in 1983 from EMM Software, created by Boris Baginski (BB Design). […]