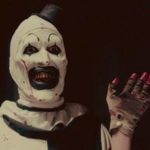 Horror Channel FrightFest has announced its lineup for the 7th annual West End Halloween chillorama, an all-day shocktoberfest at the Empire Haymarket on Sat October 28th 2017, which this year features one world, one European and five UK premieres. “After FrightFest’s successful return to central London in August for our biggest and most acclaimed event […]

Ahead of its release on Kickstarter next week, a poster and trailer have arrived online for writer Sarah Daly and director Lawrie Brewster’s The Black Gloves, an eerie horror noir which sees the return of The Owlman, the terrifying entity from the duo’s first feature Lord of Tears; check them out here… The Black Gloves tells […]