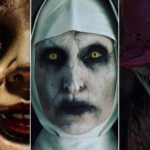 With the latest chapter of The Conjuring Universe, The Nun, proving to be another solid hit for Warner Bros. at the box office (and taking the series beyond a combined $1.4 billion at the worldwide box office), producer Peter Safran and writer Gary Dauberman have been providing an update on several planned future instalments in the […]

2013’s The Conjuring came out of nowhere and ended up being one of the best horror films in years, forever making people jump at the sound of hands clapping. The success of this film shouldn’t have been too much of a surprise though. After all, the film was directed by James Wan: The man responsible […]