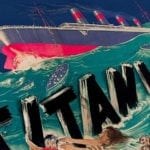 Long before James Cameron’s Titanic in 1997, and even before 1958’s A Night to Remember, Adolf Hitler and his Nazi propaganda minister Joseph Goebbels looked to score a cinematic triumph with a feature / propaganda film based on the 1912 maritime disaster. The resulting film, Titanic, is now set to become the subject of its […]