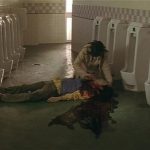 Cure, 1997. Directed by Kiyoshi Kurosawa. Starring Koji Yakusho, Masato Hagiwara, Tsuyoshi Ujiki and Anna Nakagawa. SYNOPSIS: Detective Takabe is perplexed by a series of grisly murders in which the perpetrators claim to have no memory of the crime. While seemingly random and unrelated, the murders all share one common trait, the carving of the […]