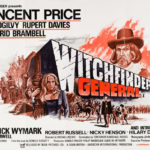 Deadline is reporting that John Hillcoat (The Road) is set to direct a remake of the cult 1968 horror Witchfinder General, which is being produced by Nicolas Winding Refn (Drive). The original film, hugely controversial for its time, was directed by Michael Reeves and told a heavily fictionalised account of the the notorious real-life 17th […]