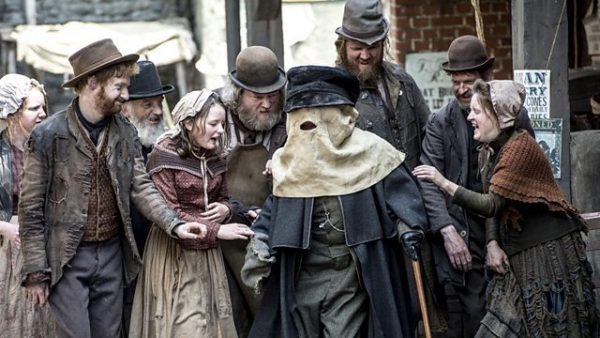 The season’s second episode tugged viewers into the underground freak shows of London after a woman with a protruding tail was found murdered in a hospital and her infant son missing.

The woman was poor, but obviously well cared for. Detective Inspector Edmund Reid (Matthew Macfadyen) and Detective Sergeant Bennet Drake (Jerome Flynn) are on the hunt and use the newly minted Detective Constable Albert Flight (Damian Molony) to sit around the office and dig through paperwork for clues on their main suspect, John Goode, who is impervious to pain and suffers an odd tic or two.

Detective Inspector Jedediah Shine (Joseph Mawle) is never far behind Reid, Drake and Jackson and the sinister mustachioed lawman pays a visit to Joseph Merrick (Joseph Drake), the Elephant Man, reminding him how he should mind his own business about what he saw concerning the death of Shine’s man in last week’s episode. Shine also reminded Merrick how easy it is for Shine to pay him a visit and say hello. I’m fairly certain he didn’t have tea and crumpets in mind, either. Shine’s threatening Merrick to keep his mouth shut…or else.

Understandably, Merrick is terrified when Reid shows up to ask about the victim, Stella Brooks, and rings the bell for Reid to be removed. Undaunted, Reid returns another time to beg Merrick for any information about who would have Goode and Brooks’ child, as Goode has gone missing.

Merrick can’t come up with a name, but he does know that Goode is not the man’s actual name, and that his father is a doctor and that was who Stella might have been trying to find seven months ago.

Long Susan gets a meaty paw on her thigh in a scene with the sneering, slimy Silas Duggan, a man we find to be on the payroll of one Inspector Shine. Shine’s hands seem to be in every nefarious plot device this season.

Back at the station, the new constable proves useful, even if he does refuse a drink with the others at The Brown Bear, and unearths the fact that Goode was a patient of the infamous “doctor of hysterics” Karle Crabbe.

Reid and Drake pay Crabbe a visit in prison and gather what little information they can from the mad doctor. Viewers learn that a few months ago, Jackson found Reid’s wife, Emily, half-naked in a drunken stupor in a gutter and talk traveled fast through Whitechapel about how she railed at Reid in her madness.

Merrick attempts to venture out in public with a hood over his face to tell Reid what he knows about Linklater’s death. In a heartbreaking scene, he’s accosted by a growing mob in front of the precinct and the lines between who the freaks are and who aren’t is blurred for the audience. Constable Flight comes to Merrick’s rescue and chases the hecklers away with the shortest Billy Club I’ve ever seen. 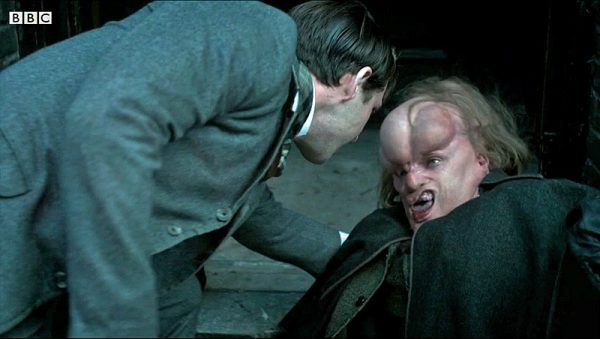 Breed the Freaks out of Humanity

Cut to a lecture on eugenics by one Dr. Corcoran, a zoologist with a mean past. It comes to life that this very doctor is father to Alexander and his brother, both carriers of a certain genetic “curse” that also claimed the life of their mother. Both boys suffered immense cruelty at the hands of their father—beatings, deprivation, torture—all in the name of “curing” the abnormality so that it would not pass on to the next generation. The treatment eventually caused Alexander’s brother to take his own life and for Alexander to flee underground into the freak show scene and change his name—to John Goode.

The pieces are all fitting together now for Reid and it’s a race to get to the baby Corcoran is holding before John Goode does. They arrive too late to find Goode holding his son several stories up, preparing to jump and end both his and his child’s (potential) misery. No matter how the law men attempt to calm Goode, he will not be swayed.

Merrick saves the day and his monologue about ostracism and loneliness was something of beauty.

“Life is what you hold in your arms right now,” he tells the trembling new father. Goode steps down and Stella Brooks’ baby is safe.

It’s time for us to say goodbye, as it happens, to the most honorable character thus far. As he promised, Shine pays an easy visit to Merrick and silences him once and for all.

In his office, Chief Inspector Fred Abbeline essentially sends both Reid and Shine to their corners, putting the kibosh on both men’s determination to undo the other. To add insult, he makes the two shake hands, which takes several awkward seconds and one loud outburst from Abbeline to finally make Reid comply.