Holy time warps! The writers wasted no time in this week’s episode and splashed a “Four Years Later” before the opening credits were cold in their graves.

This week’s theme seems to be about temptation — the lusty kind, the political kind, and the greedy kind.

Four years — go ahead and marinate on that a moment.

Ragnar (Travis Fimmel) and Aslaug (Alyssa Sutherland) now have two sons with another child due soon.

The village of Kattegat has seemingly grown and repopulated with new faces, including a new serving made that catches Ragnar’s attention (temptation!) and Aslaug’s jealous wrath. Watch it servant girl, that woman’s dangerous.

And admit it, women everywhere were smirking at the jealous woman. It’s hard for some of us not to hold grudges that she’s the reason Lagertha’s not in this week’s episode.  We’re still mad at you, Aslaug…

Aslaug admits to Ragnar that she is a volva, a Nordic seeress, and just to spite him because he flirted with the serving girl, tells him that this unborn child with have “the eyes of a serpent.” Whatever that means…

Floki (Gustaf Skarsgard) arrives and pushes his way in front of a fire. It’s winter and it’s cold and our man has been busy rebuilding Ragnar’s fleet all these years.

Rollo (Clive Standen) has been busy trying to drink himself to death. Whenever that fails, he passes out in the cold and tries to freeze himself to death much to the embarrassment of Siggy (Jessalyn Gilsig).

And he’s fat, too. Fat, out of shape, and a weird shade of grey—a far cry from the indomitable warrior he was last season.

In one touching scene of domestic bliss, Siggy holds a hot knife in her hand and tells the fallen Rollo to make a decision—get it together or put himself (and her) out of his misery and spend “eternity in hell.”

Ragnar waxes poetic in a scene or two about how much he misses his first-born son, Bjorn. That makes me happy because it must mean we’re going to see him (and Lagertha!) soon. Turns out, the preview for next week’s episode confirms it.

Excitement begins to build in the village as both King Horik (Donal Logue) and Jarl Borg (Thorbjornn Harr) arrive and begin to make ready to raid the west once the water thaws. In a surprising twist of unsurprising politics, King Horik lets Ragnar know that he’s no longer interested in letting Borg in on the raiding fun and let’s Ragnar know it’s his job to tell him so. 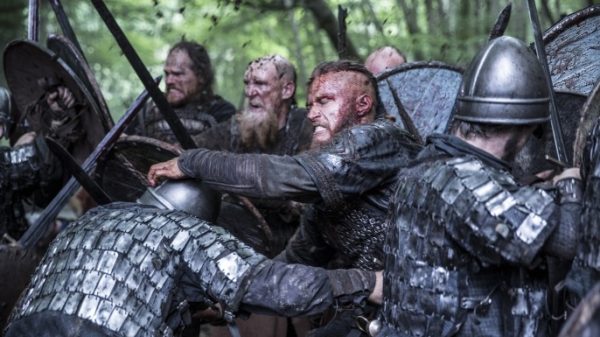 Rollo arrives to beg forgiveness and look for a seat on one of the boats that will be heading out soon. Ragnar forgives his brother, but tells him he is not welcome to raid. You can see Rollo’s heart break in that scene and despite the fact that he’d basically gored One Eye in the last episode, you feel for him.

Borg does his best to use his silver tongue to rile Rollo into joining him on some sort of revenge against Ragnar and Horik (temptation!) but the straight right Rollo delivers to the Jarl’s nose was answer enough. Rollo’s staying with his family and Borg can row himself home.

The village is in full training mode and we see that our favorite reformed monk, Athelstan (George Blagden) fancies himself a raider now. Ragnar brings him down a notch or two, obviously, but still. That shaking-in-his-leather-boots boy that arrived last season is growing into a grizzled Viking. Ragnar mentions the boats heading west and that Athelstan will be going, too. We couldn’t help but see the glint in his eye when he mentioned his homeland. Might he be considering an escape once he hits Northumbrian shores? (Temptation!)

Before the raiders leave, we watch Siggy talking about how much she knows (the good and the bad) about Ragnar. The camera shot widens and we see she’s talking to King Horik.  She offers to let him in on all sorts of information (temptation!) and a later scene shows that by information, Siggy really meant she was going to show Horik all of her hidden, crazy tattoos in naked, deceitful abandon.

What is that woman up to? Is she setting Rollo up to be chief again? Or is she looking to be queen? One can never tell with Siggy…she’s lost so much in the short span of a season that it would be foolish to count her out. Or trust her.

The boats leave and Rollo stands on a cliff, basically chucking sentimental rocks at them as they go. He’s staying behind and it looks like he’s one sad Viking.

The Vikings hit the open sea with their bright red flags and their dragon-faced longships. It’s not an easy trip with near-cliff misses, stormy seas, and the fact that they lost a number of their boats somehow. They finally make landfall and it’s not long before the local military is all over them with flying arrows and rushing men.

It’s a bit of struggle, but the raiders finally submit the soldiers and glean the information they’re looking for. They’ve landed in Wessex, a far cry from the Northumbria they were aiming for.

Wessex is home to King Ecbert, a man Athelstan describes to Ragnar as being “just like you.” For the record, that could mean anything—bad with relationships, a little twitchy, or maybe just ruthless and bloodthirsty.

We’ll find out next week.