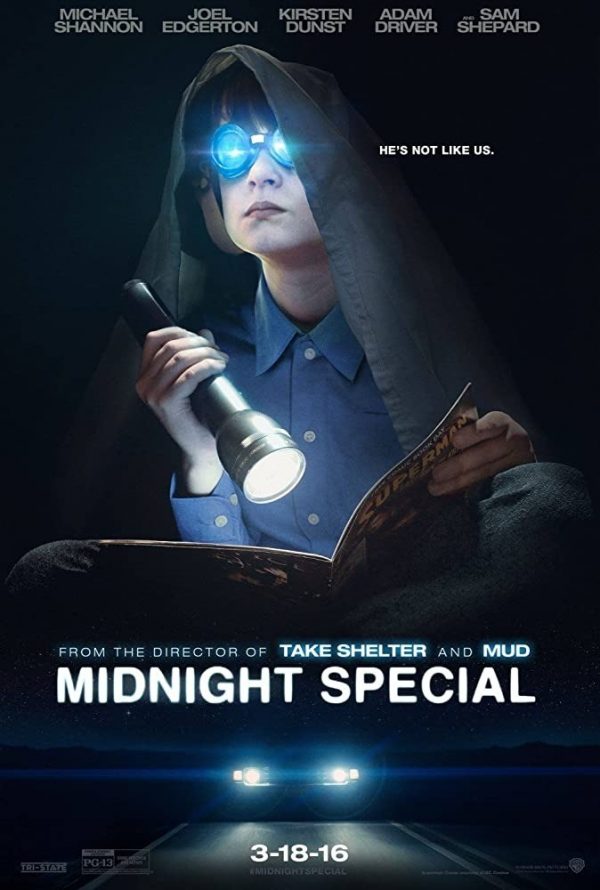 A father and son go on the run after the dad learns his child possesses special powers.

On the surface, Midnight Special appears to indulge in science-fiction tropes (narratively speaking, mimicking classics such as Close Encounters of the Third Kind and E.T), offering nothing new to the genre. Realistically, that is a limited, funneled viewpoint holding back the true 1980s Steven Spielberg reminiscent greatness and appreciation to be found.

Essentially, this is the thinking person’s kind of movie, depicting a seemingly humanoid yet otherworldly being unintentionally upsetting order and balance throughout the day-to-day life of Earth’s inhabitants. However, it’s also relentlessly intense and never ceases pushing forward, whether it be with a display of action or knowledge about certain characters coming to light at both a steady pace and perfect timing. It may be an oxymoron, but Midnight Special is the equivalent of a low-budget blockbuster; sure it moves along at the speed of a freight train, but it never once dumbs down and insults your intelligence.

If anything, Midnight Special most certainly demands an imaginative audience that can fill in the blanks that writer/director Jeff Nichols (Take Shelter and Mud) refuses to fully explain or rationalize. During the post-film Q&A at a special screening in Chicago, Nichols even admitted he’s not much of a fan of traditional plot structures (exposition, endings, setting things up, etc), and has, in other interviews, talked about cutting away as much plot as possible to this particular film, which is something that shows immediately considering that the movie opens up with the story in motion.

Roy (constant Nichols collaborator Michael Shannon) and his state-trooper friend Lucas (Joel Edgerton) are on the run with Roy’s son Alton, who can emit a blinding light from his eyes that sort of stuns recipients into a gaze while thoughts (possibly even experiences) are transferred from conscious to conscious. It’s never made exactly clear who or what the child is (even going as far as to outright ignore my biggest question and only real axe to grind with the movie, which is how two human beings can give birth to what is essentially an alien), which is an artistic decision that would end up crippling most other movies narratively, but Nichols allows viewers to overlook the lack of real information by using these traditional science-fiction clichés to tell a story that focuses first and foremost on grounded and genuine human emotion.

Michael Shannon for example, once again exudes intensity, but it’s a tough exterior covering strong emotions; the only thing that matters to him is the road trip he is on that sees him getting his boy to a place of great importance. The same goes for Kirsten Dunst playing the mother of the child, although she obviously looks very much less likely to become unhinged and go nuts like Michael Shannon. Her affection is more motherly, but equally as caring. Joel Edgerton’s Lucas may have little revealed, but his character is still complex; he’s essentially a non-believer who has now seen Alton’s power, and is giving assistance to a friend even though they aren’t always seeing eye-to-eye.

Naturally, there is a government division on the hunt to detain the boy for fear that he is a potential global threat and weapon, except they are pleasantly not as one-note and stereotypical as you would believe them to be coming in, with Adam Driver’s NSA character showcasing a moral compass.  There is also a group of radicals under the impression that the boy is a Messiah, holding the key to their salvation and the usual expected whack-job religious nonsense, however even they feel like real people despite the plot abruptly abandoning them 25 minutes into the film. Midnight Special is a smartly crafted exercise in exploring what the child means to different individuals and factions; parents, government agencies, religious extremists, society, and most importantly, the boy understanding himself.

For such a small budget, it’s also astonishing just how visually pleasing some of the more spectacular moments are. The actual light from the boy’s eyes looks a little bit cheesy and cheap, but there is also a meteor shower scene that looks absolutely awesome while coming at an unexpected timing. Also, even when the movie grows increasingly more climactic, it never falls into overcooked territory employing tonally inconsistent unrealistic action; it’s all always realistically staged, maintaining that feeling of everything being grounded in our world.

Even though the film embodies many familiar elements of the genre, Midnight Special is something different, keeping both your brain and your ass on edge. It’s an arthouse blockbuster. Viewers are dropped into a world where the only exposition is minimal and fed organically (the beginning utilizes a broadcast news report to summarize the set-up), allowing for a series of individually fascinating scenes to play out. The details may be scarce, but we always remain in the loop, which is a sign of great writing.