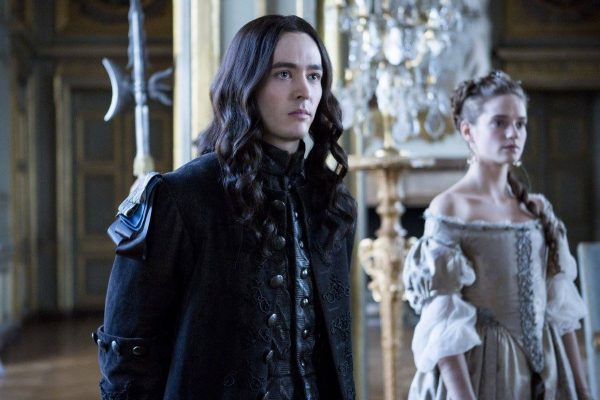 Episode three of BBC Two’s periodical pornography sees a rather dashing Prince Annaba (Marcus Griffiths) arrive at Versailles to negotiate a trade deal with King Louis (George Blagden). Meanwhile, French nobility are up in arms about Louis’ proclamation of “I am France”, and his demand to see proof of their lineage. Contrary to the titillating parties and gratuitous humping of the previous two episodes, episode three of Versailles is getting down to serious political business.

On IMDB, the top three keywords listed for this episode are bastard, female pubic hair and roulette. This gives you some small inkling of what kind of a clusterfuck Versailles is slowly shaping up to become. Aside from some rather lavish costumes and beautiful interiors of the palace, I am still yet to see where and how the production’s 26-million euro budget has been spent. It certainly wasn’t on the writing.

More wooden dialogue, pieces of intrigue that the audience are now beyond caring about. The relationship between Louis and his brother Philippe (Alexander Vlahos) has gone from at-each-other’s-throats last episode, to bezzie mates in this one, to the point where Philippe gives Louis permission to bonk his missus, Henriette (Noémie Schmidt), while he’s off to war. Louis kindly obliges, and Henriette sheds a few crocodile tears at Philippe’s departure, asking him to come back alive, despite the fact that she is deeply in love with Louis and she was actually the victim of an unnecessarily brutish and graphic rape at the hands of Philippe in episode one. Meanwhile, Louis is off to rape his wife Marie Therese (Elisa Lasowski), who’s perked up a lot after Claudine (nowhere to be seen this episode, unfortunately) yanked the afterbirth out of her post-childbirth. It emerges that Prince Annaba of the Ivory Coast – who I assume is supposed to be an antagonist in the drama, but actually ends up being a fairly decent guy, garnering far more sympathy from us than whiny, manipulative, anaemic Louis ever will – is actually the father of the Queen’s black baby.

Amid a lurid flashback where we see pre-pubescent Louis introduced to sex at the hands of a rather dirty-looking noblewoman (female pubic hair aplenty), once again this decadent story, which had so much promise on paper, is the victim of wooden writing and lack-lustre direction. It’s going to have to work hard over the next few episodes to redeem itself.