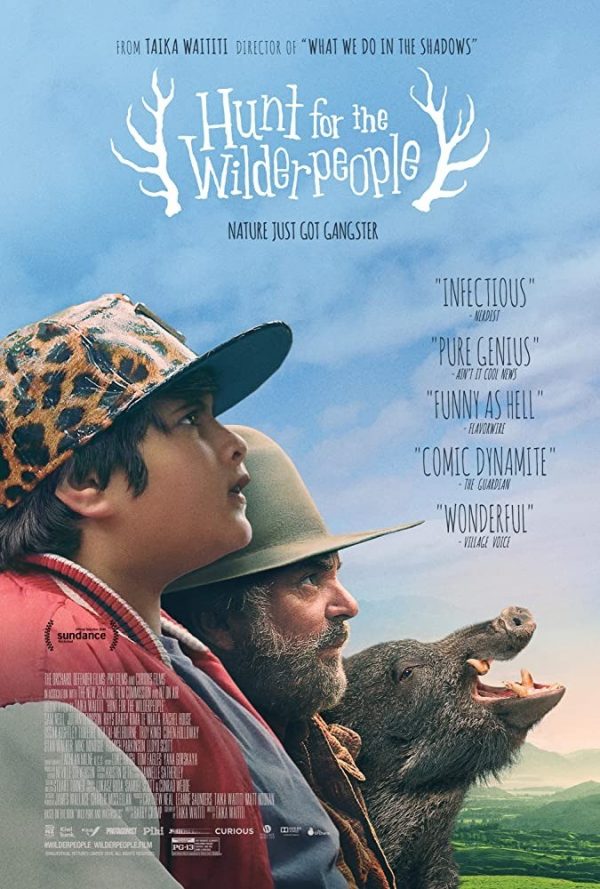 Ricky is a foster child. He is taken to Bella and Hector, who live near the New Zealand bush. After Bella unexpectedly dies, Hector and Ricky trek through the forest and find out who they really are…

Stuffocation, a book by James Wallman, reveals how people are becoming fed up with materialism. Fed up with hoarding a collection of junk, people feel the need to get back in touch with nature. Wallman predicts that this disillusionment has led to a rise in people who are ‘Experientialists’: People keen to experience more rather than own more. Hunt for the Wilderpeople gives us a taste of the glorious outdoors adventure, into the New Zealand bush, where the lush forest and broad trees provide isolation and cover for the hunted “Wilderpeople”, Ricky (Julian Dennison) and Hector (Sam Neill). Hector owns little and Ricky is from the city: brands and objects define him. The vast beauty of nature is unforgettable – or, should I say “magisterial” – and it’ll convince you to throw away your worldly goods and become an avid explorer yourself.

Ricky, a chubby teenager, is en route to another home. A foster child, he has been moved on multiple times and through quick editing we see why: he kicks, spits, loiters and graffiti’s on the walls. This time he arrives on the doorstep of Bella (Rima Te Wiata); a kindly, warm presence who is unconventionally open-minded about child-rearing and leaves a knife by Ricky’s bed to keep the “monsters” away. Hector, her husband, is a quiet, grump of a chap. He adores Bella, but doesn’t take to Ricky’s cheeky attitude. Ricky is clad in a garish sports jacket, a hoodie underneath and a bright cap on his head. This is his armour for the tough world he knows but he’s not prepared for nature. In a brutal twist, Bella dies unexpectedly, and Hector and Ricky are forced to fend for themselves. They hunt rabbits and eels to survive and ramble through the vast bush. The police and child protection agencies, on the other hand, see it differently, believing Hector has kidnapped Ricky and the child is danger. The hunt is on and Ricky and Hector have no desire to give themselves up. 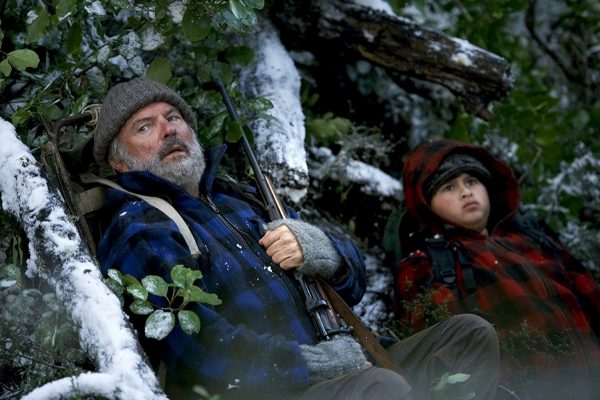 The young lad and older gent, lost in a forest, immediately took me back to Pixar’s Up. In a similar manner, Up‘s spectacled grouch has lost his wife as Hector has, while Ricky and Carl are both kids who unexpectedly join the grieving husbands on their difficult journey. What separates Hunt for the Wilderpeople from Up, is the constant acknowledgment of nature and its awesome power. Whether we are on top of enormous mountains looking down on the forest or peeking through foliage to see wild boars beyond, it’s a joy to be trapped with Hect and Ricky. The grim aspects of surviving for months are framed as jokes while setting fire to a shed isn’t an example of Ricky’s bad behaviour, but rather a comedic twist to his plan gone-wrong. Hector is an expert in wild foraging and bush craft so there is clearly a criticism on the stuffy, material world of the city as he trains Ricky. Hector’s grunts, gruffs and exasperation towards Ricky are understandable and his decision to rarely open up reinforces how Ricky struggles too. The spitting, kicking and loitering that defined Ricky as a “bad egg” isn’t an issue in the bush and Hector has more in common with Ricky than he knows.

Taika Waititi is carving a unique niche for himself in the indie-film world (though his next project couldn’t be bigger in Thor: Ragnarok). After 2015’s What We Do In The Shadows, his innovative stories and intelligent direction is fresh and exciting. Montages are directed as smooth one-shot camera moves while the structure is comfortably split into chapters. Hunt for the Wilderpeople, through likeable characters, an inviting environment and playful energy manages to sink into your subconscious. There’s a need to get away from the ‘stuffocation’ of the modern era and escape to the wild – and Hector and Ricky are the best company for it.