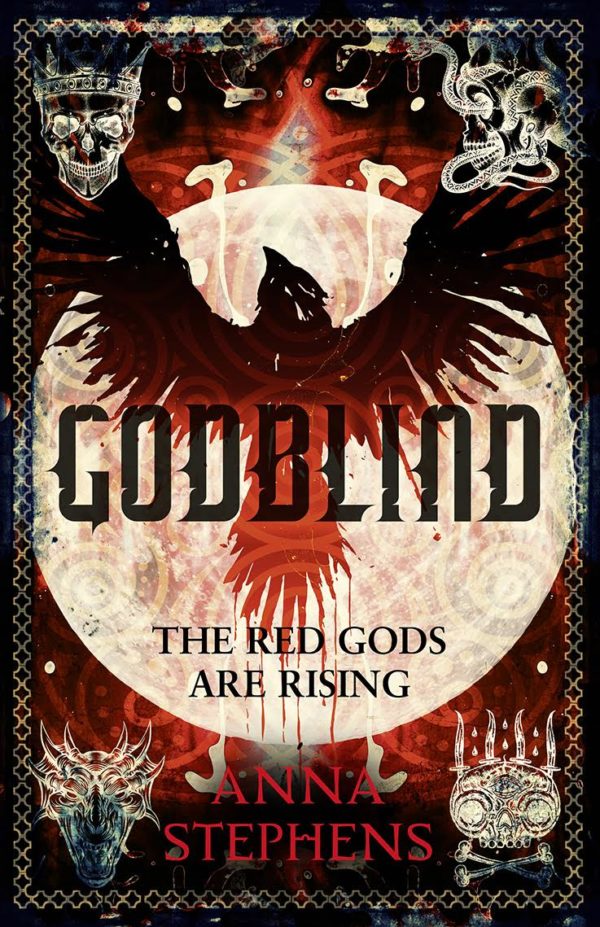 Godblind is set in a world that has become complacent in their trust that the Red Gods will remain in exile. We are told very quickly that the Red Gods were banished almost 1000 years ago, during this time the Gods of Light have kept the people of Rilpor safe from the darkness, but the world is now entering a time of change and plans have been set in motion that will allow the Red Gods to break free from their banishment.

Throughout the story, we are guided through the action from a number of character perspectives, this makes it so that (for me at least) you never really get a proper feel for the characters that you would if there were a smaller group of characters to focus on. In this book, we move across ten characters, some of whom have more chapters than others. In each chapter, you follow that individuals thoughts and actions, although they also interact with other focal characters.

Time moves quite quickly for some of the characters, but slower for others, so it is hard to keep track of what is happening simultaneously, or if these events are catching up with the previous narrative. This is also hindered by the fact that there are two different means of keeping time, dependent on if the character is on the side of the Red Gods or on the side of light. Due to this, it is easy at times to see the plot twists coming way before it affects the characters.

With a large cast of characters, there are some that are more captivating than others, my favourite character is Crys, a soldier of Rilpor, who always finds himself in trouble one way or another, and yet always try to do the right thing, leading him back into battle time and again. Crys story is also interesting for how much he grows during the story. Whereas other characters such as Rilporin, are more predictable as she keeps getting thrown into the role of the victim who needs to be rescued, as she does not have the skills necessary to save herself. Which leaves Dom in the role of saviour for the light even if it looks like that may not always be the path he has walked along.

Godblind is a grim read, some of the ways Stephens’ describes the blood sacrifices to the Red Gods, is likely to haunt me forever, but I will leave you to read that for yourself. I think one of the more interesting things about this book, is that these Gods are very much alive and present in this reality, at least to the people they choose to reveal themselves to. On the other hand, there are a lot of people content to pray to the Gods of Light without any acknowledgement that they are there. There is also a lot of sign posting as to who is good and bad, even with the naming of the Gods and what kind of people they are worshipped by.

Sadly I didn’t enjoy this book, not because of the violence, or the amount of death throughout, but rather because by the end of Godblind and it is an intense ending, I didn’t really care enough about the characters to want to see who manages to survive for the sequel.