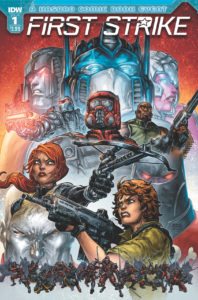 A Hasbro comic book event! A new era of peace is dawning as Earth formally joins the Cybertronian Council of Worlds. That is… until Baron Ironblood joins Destro, Storm Shadow and other nefarious villains in a terrorist attack on Iacon! As chaos takes hold on Cybertron, it will be left to Scarlett and the rest of G.I. Joe on Earth to discover the true purpose behind the attack before both worlds descend into all-out-war!

Since Hasbro combined all their comic properties into one universe, there’s been some crossover with the titles but not a major event that brings them all together since the initial Revolution. That changes now with IDW’s First Strike, which sees it spinning out of recent events in Optimus Prime and G.I. Joe. So how does First Strike’s inaugural issue fare?

The tensions between Earth and Cybertron have been simmering for a long while now, ever since Optimus Prime annexed Earth into Cybertron’s Council of Worlds in order to better protect the planet. It’s an issue that has been one of the main focuses of the Optimus Prime title and not everyone, Cybertronians and humans alike, are fans of the decision. The G.I. Joes are security for Earth’s official entrance to the Council when suddenly Cobra attacks, spreading chaos over both planets.

This issue surprisingly featured more from the Joes than the Transformers. I had expected there to be a bit of a balance, but characters such as Prime and Starscream only get brief roles while the majority of the issue is dedicated to Joe’s Earth-based team as their other half is stranded on Cybertron. Now maybe that is intentional since Baron Ironblood and Cobra are the main antagonists, but it was a bit surprising nonetheless.

The balance between characters could be an issue down the line (just take a look at the roll call featured at the start for the amount of character featured), but it also does make a bit of sense for the opening issue to focus so heavily n the Joes. Once the spotlight gets placed on them, each member gets an equal amount of time, though Scarlett is still the primary focal point and the set-up for her arc is an interesting one as her old mentor is the one leading the attack on Cybertron.

Mairghread Scott and David A. Rodriguez share writing credits one this one and they both do well with the story. They’re quick to go over the controversy around Prime’s actions and recap the history between Cybertron and Earth, as well as the history with the Joes as well, and each character sounds distinct from the other for the most point. It does, however, take a little bit for the action to get going. Perhaps a bit too much time is spent at the start recapping past events and characters. There’s also some good humour in the early part of the issue as Cybertronians misunderstand regular Earth sayings or the Joes watch the boring proceedings before the action breaks out. Overall, there is a good pace to this issue.

The art by Max Dunbar is well done, particular on the few shots of the transformers. There is a good amount of detail on them, which makes it more of a shame they aren’t featured more in this issue, and Dunbar’s facial work on the Joes is nice as well. He makes each one look distinct and the action flows smoothly from panel to panel. Andre Zarate’s colours compliment Dunbar’s art, giving the comic a vibrant look.

This is a good introductory issue to First Strike, though again was surprising how little the transformers appeared given the crossover appeal. With such a large cast of characters set to appear, hopefully a good balance can be struck as the series moves forward. Scott and Rodriguez do have a good handle on the character’s personalities, though, and the art by Dunbar and Zarate fits this story well. Included is a short back-up from John Barber and Netho Diaz from the villain’s point of view on why they want to take out Cybertron. All in all, it is an intriguing crossover between the various IDW titles so far.