Journey to Stump Asteroid, where the biggest no-hold barred brawls in Dimension X can be found! The newest warriors to enter the ring? The TMNT! 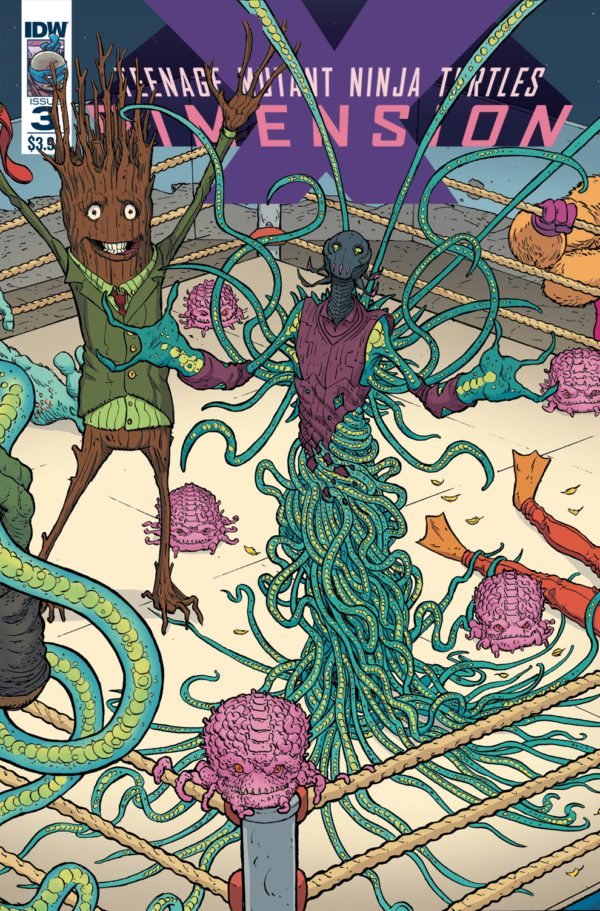 It’s been a long time since I’ve followed wrestling to any degree. I remember a simpler time, when I thought that the fights and drama were real. Now I see it for the soap opera it is.

It seems Mikey hasn’t quite figured that one out yet. It’s a recurring joke in Dimension X #3. and I found it very funny. The more I think about it though, shouldn’t he know better? It’s not the most original joke, but for me it lands each time so I can let it go.

It’s a very different setting than the past two issues, as the series has clearly set out that it’s aware of the pitfalls it could easily fall into. It might not have avoided one though, and that’s the weakening of the main antagonist after his initial appearance. Hakk-R is a great villain, with a unique voice and approach. But I’m concerned that he’s being taken down a peg or two so that he can be beaten. The Hakk of the FCBD issue and Dimension #1 would probably have killed a few people here, yet it doesn’t pan out that way. Hmmm, watch it IDW, I have faith in you but don’t worry one of my favourite new characters.

On the plus side this is a great looking issue! Sometimes the use of a single colour for a panel gets in the way of seeing what’s actually going on, but generally I’m a big fan of this style, especially how Raph comes across.

All three issues have been entertaining. I’d put this one second from what I’ve seen so far. It’s a cool setting and I didn’t spend it being reminded of Groot. Sure, there are some story points that I could get really bent out of shape about but this series is good fun. That’s worth something.