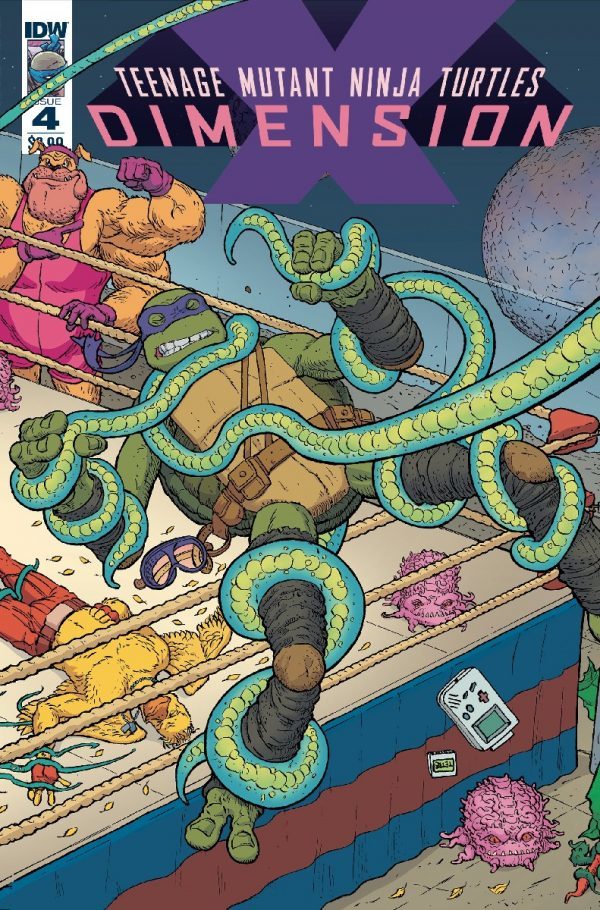 The TMNT land on a planet of criminals and lowlifes. In these surroundings, one heroic pilot is on the lam from the most powerful crime boss on the planet: a pilot named Ace Duck!

Chris is a good solid name. That it’s my own name has nothing to do with that…

So to see a Chris on art duties for issue 4 of the Dimension X series is pleasing. What’s even more pleasing is that his artwork is great! Very smooth, with a fantastic looking take on the turtle’s design. It’s boosted immensely by Mark Englert’s purple and pink hues. This is a great looking issue. I mean, it even has Leo wearing both his swords on the same side. I like that a lot, even if I’m not sure it makes sense.

Which makes the rest of it a bit of a shame. There’s nothing wrong with the story, and I’m very keen on a duck-based character being introduced, but not a lot happens. Ace is a really cool guy, and I’d be happy to see more of him. He’s got a swagger that we haven’t really seen amongst the IDW roster. In fact, I could see him getting on well with Raph and Casey.

Damn! As I’m writing this I just realised something. He reminds me of Ace Rimmer. Check out Red Dwarf if you don’t know what I’m going on about.

But it’s all fairly obvious. I know you can only do so much in one issue, but there were no surprises from a story point of view. Everything pretty much happened how you’d figure it would.

On the plus side this is a great issue for Mikey. I love his wide-eyed enthusiasm for new things, and he’s on the verge of exploding with excitement here. It comes across really well.

With one more issue to go I’m curious how things are going to be tied up. Please don’t kill off Hakk-R.