Sansa Stark – Thank you for all your many lessons, Lord Baelish, I will never forget them.

And so Game of Thrones Season 7 comes to its short end.  With only seven episodes this season we’ve had a lot of story forced into us over these past few weeks, giving this season a Max Headroom ‘Blipvert’ feel rather than to its normal pace, in which the story is allowed to ferment gradually.  Whether this has pleased the viewers is down to personal preference really, but here we are at “The Dragon and the Wolf” and it’s all about to get very cold for the occupants of Westeros.

All parties finally come together at the Dragonpit, which lies within the boundaries of King’s Landing. With Bronn bringing Tyrion, Varys, Brienne, Jon Snow, the Hound (along with the Wight boxed up), Theon and a number of Dothraki guards, they’re then met by Queen Cersei who is flanked by Jaime, her loyal guard Gregor Clegane, Qyburn, Euron and many Lannister Soldiers.  Pleasantries are exchanged between past friends and threats are handed down to others who stray to close.   Cersei motions towards the missing person from the meeting, with that two dragons circle the air and land before them; Daenerys takes her seat. 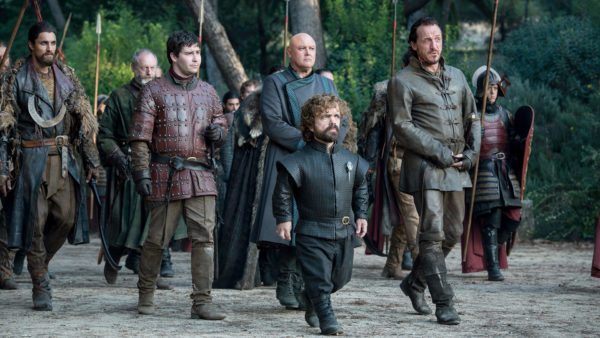 With all in attendance Tyrion begins to talk about the undead beyond the wall, however Euron interrupts the conversation baiting Theon over Yara, and also insulting Tyrion himself.  His jibes however aren’t enjoyed by even Cersei, who orders him to take his seat.  After both talk of a truce and troop movements, Cersei is still showing no signs of supporting the battle against the supposed undead army.  It’s here that the Hound delivers a chained wight, which runs directly at Cersei, stopping mere feet from her.  Jon proceeds to show the crowd that normal weapons can’t kill the undead, only fire and dragonglass.

Once the show has finished, Euron stands up and asks if the undead can swim; discovering they can’t he tells Daenerys that he’s going back to his island and he recommends she do the same.  Cersei offers the support of the Lannister armies to fight this war, but only if the King of the North promises not to travel South to Dragonstone during this conflict.  It’s here, he truthfully admits he’s already given his support to the new Queen, with that a rather furious Cersei ends this gathering and heads for King’s Landing; the offer of support is now off the table. 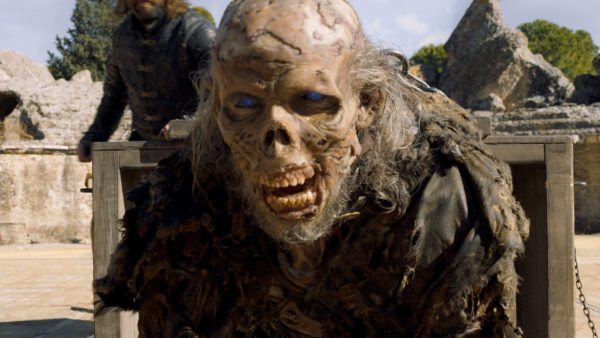 With the Lannister group gone, Tyrion questions Jon Snow on why he couldn’t have just lied; Daenerys too finds him admirable in his honesty but also echoes the words of Tyrion.  Jon goes on to explain about the new Westeros, about truth and peace.  Stuck for a plan, Tyrion realises that he himself must face Cersei.

The meeting between the Lannisters is tense, with Cersei laying on the table the blame for everything that has gone wrong under their banner from the death of their mother all the way to her final child passing.  No matter how Tyrion speaks or what words he chooses for his apology she’s refuses to listen, even when he motions to the fact that killing their father – to him – was in truth an act of self-defence.  However, she still cannot give the word to Gregor Clegane to cut him in two.  It’s during the conversation about protecting the family, that Tyrion registers that Cersei is pregnant and clearly he’s found a chink in her armour.

Later back at the Dragonpit, Tyrion approaches alone and the party from Dragonstone initially seem to believe he has failed in his attempt, however he is closely followed by Queen Cersei, plus her entourage, and she decrees that Lannister forces will help with this battle. The jubilant party from Dragonstone make their way back home. 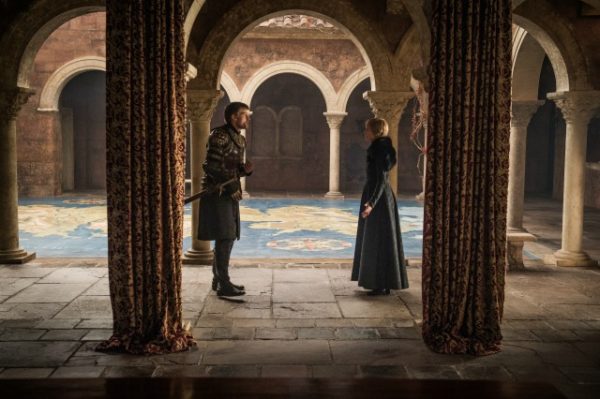 Later as Jaime Lannister begins to formulate a plan of attack with his men,  Cersei calls him into to her room and begins to mock him.  It appears she has no intention of sending any Lannister forces North and plans on letting both the forces of the North and Daenerys battle it out on the own.  She also explains that Euron didn’t run away, she’s ordered him (without Jaime knowing) to hire the services of the Golden Company, thanks to a loan from the Iron Bank.  Furious at the fact that Cersei gave her word and is betraying millions, he tells her he’s leaving her.  With this threat of treason, she motions towards Clegane who draws his sword, but again she just cannot give the final word to execute both brother and lover.

Outside the walls of King’s Landing we see Jaime Lannister, no longer in his armour, leaving the city on horseback.  As he puts on his gloves he notices snowflakes falling around him.  Winter has finally come to King’s Landing.

Back at Dragonstone, plans are being drawn up for the movement of troops across Westeros with concern for Daenerys from Jorah, who highlights that not everyone in this land will be happy to see a Targaryan again.  However, wishing to be seen as part of the change it’s decided that the Queen of the Dragons will be part of the movement.  As Jon leaves the hall to make arrangements he’s stopped by Theon, who bares his heart and soul to the King of the North.  After many words spoken, and though no apology is accepted as such, Jon proclaims that Theon is both still a Greyjoy and a Stark, and he needs to stop talking and rescue his sister. 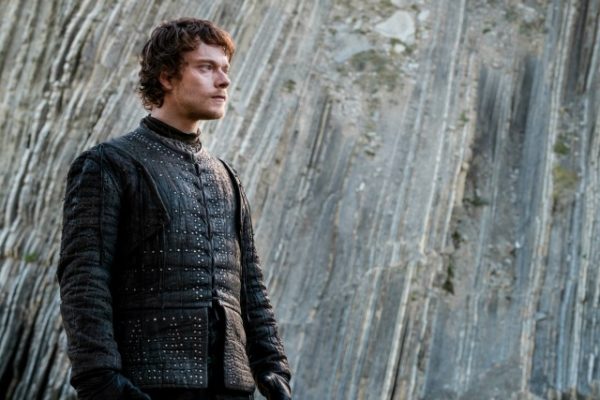 On the beaches of Dragonstone, Theon approaches the remaining forces of Yara’s fleet and attempts to command them towards a rescue of their previous leader.  Things don’t go so well as this ragtag crew mock him, with the new self-proclaimed leader beating him to the ground; however the once-coward has regained his fight since the talk with Jon and proceeds to battle back, eventually regaining both the upper-hand and admiration of the crew.

Further north at Winterfell and Littlefinger is once again corrupting the mind of Lady Sansa.  She’s received Jon’s latest scroll informing her of his allegiance with Queen Daenerys and the upcoming war, this bothers her and also the actions of Arya.  Lord Baelish seizes on the Arya concern, twisting this and stoking the flames to the point where the elder Stark sister seems to believe that her own sister may be ready to take her title by any means necessary. 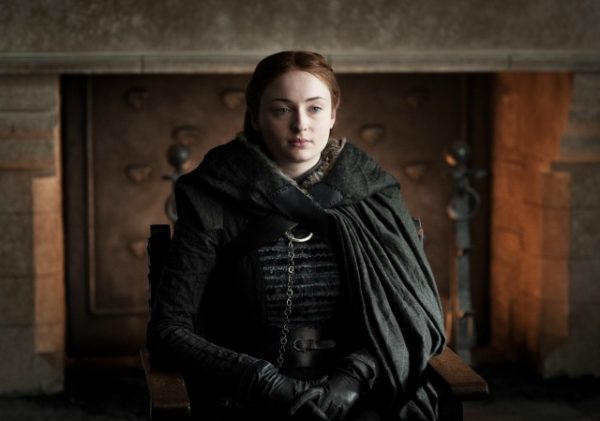 Later, she calls an audience in the great hall and gets the guards to bring Arya in, locking the door shut behind her, she begins to read the charges of treason and murder, seemingly directed at her sister.  However, when Sansa repeats herself she finishes the sentence aiming it at Lord Baelish.  Pulling his numerous crimes out from the past from the poisoning of Jon Arryn, the murder of Lysa, his actions that led to the death of Ned Stark and numerous other crimes.  As he pleads with the Vale guards, then begs for mercy to Sansa, he gets nothing other than his lessons repeated and past speeches from Bran.  With that Arya slits his throat and the creeping shadows that once occupied the halls of Winterfell are gone. 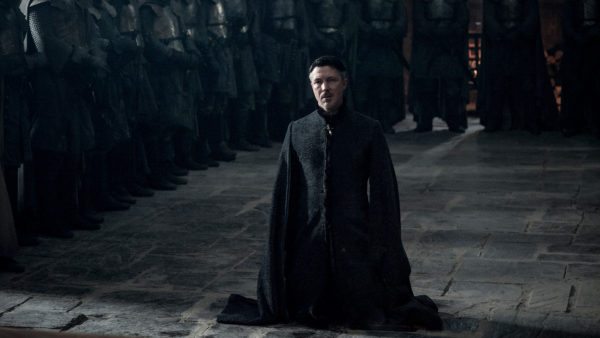 As the snowfalls stronger, Sam Tarly arrives in Winterfell and makes his way to speak with Bran.  They speak of Jon’s parentage as Sam has news, Bran believes that he’s a Sand Bastard not a Snow.  However Sam, has had access to High Septum Maynard’s diaries in the Citadel, here he discovered (well Gilly did) that Prince Rhaegar and Lyanna Stark, were married in secret and Jon is the true heir to the Iron Throne.  Bran then confirms this is true by taking a vision back in time and watching the wedding.

Elsewhere on a boat at sea Jon and his Queen and currently entwined in each other.

Over at the Eastwatch, the dead have arrived in their thousands and as they begin to form ranks the Night King arrives on the back of the now undead Viserion, and this mighty beast unleashes a column of blue flame which tears down the wall of ice in a matter of seconds.  The dead begin to mass into the land of the living. 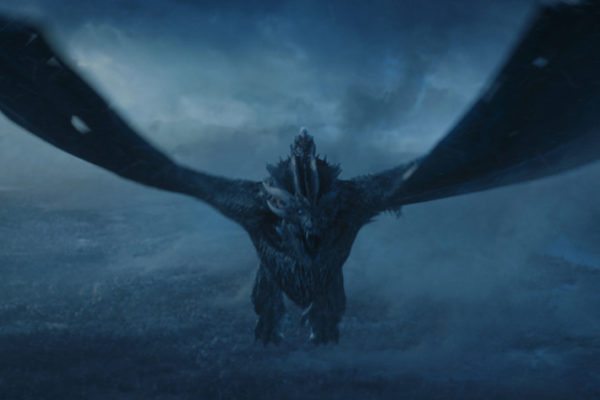 It’s over! Season 7 is done and if this season will be remembered for anything, it will be that Westeros had gained faster than light travel.  Last week, Brienne of Tarth is Winterfell and this week she’s at King’s Landing!  Forgive me if I’m wrong but wasn’t Season Four practically a Medieval road trip for Brienne and Podrick?

This closing episode yes had a big dragon blasting “The Wall”, but it reminded me very much of what The Walking Dead manages to do so well, however they drag it out over a full season.  Here’s an episode which is fairly hum-drum, but then the writers gave us something truly fantastic at the end so that’s all we’ll remember and talk about, though in truth we’ve just sat through a fair amount of mediocre to get to the dragon…but hey! Remember the dragon!? 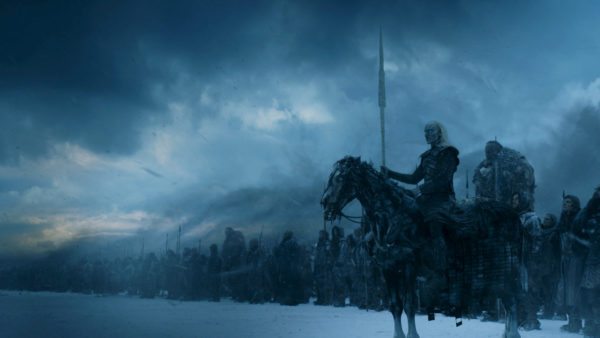 This closing episode gave us in truth what?  A conversation in which Cersei was sneaky and went back on her word (expected). The Stark sisters suddenly becoming great mates again, after weeks of seemingly pointless tension building up and everything is forgiven in the hall (sorry what?). The completely under used Littlefinger for Season 7, the man who masterminded the crumbling of Westeros just to get himself in a position of power,  is here simply bumped off to fulfil the major character death quota for this season.

This was a closing episode, a series finale and we were given a dragon for the final two minutes to make us happy.  We should be really angry here.   A seven episode series, one involving a cameo from Ed Sheeran and the finale gives us little more than a taste of what’s to come in Season 8, which may be in two years time.  It’s fair to say I myself wasn’t impressed with the closing episode.  If they’d finished it at Beyond the Wall I would have been over the moon, but not here.  This was a poor finale.

Oh and for those unsure on why Jon Snow is now first in line for the Iron Throne the video below may help.  Also if you’re unsure what his relationship is to Daenerys she’s his Auntie.  Yep I know this is the Game of Thrones and family love isn’t shied away from, but I bet they’ll be red-faced when they find out.