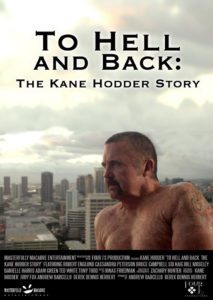 SYNOPSIS:
To Hell and Back: The Kane Hodder Story is the harrowing story of a stuntman overcoming a dehumanizing childhood filled with torment and bullying in Sparks, Nevada. After surviving a near-death burn accident, he worked his way up through Hollywood, leading to his ultimate rise as Jason Voorhees in the Friday the 13th series and making countless moviegoers forever terrified of hockey masks and summer camp.

Stunt people have been sadly over looked by the film masses for decades now, sadly still not recognised for their life-threatening work by the powers at The Academy. But one man has truly transcended just being a stuntman or stunt coordinator, as well as going beyond simply being a man in a hockey mask with a machete. That man is Kane Hodder, and this is his story.

To Hell and Back: The Kane Hodder Story is a condensed version of Hodder’s autobiography Unmasked, with comments from the man himself as his contemporaries including Robert Englund, Bruce Campbell, Cassandra Peterson and more. Hodder opens up about his school days where he was constantly bullied, the tragic accident that saw him set on fire, and – crucially – how that has affected him later in life.

To read Hodder’s words in Unmasked is one thing, but to see the man we’ve best known for smacking teenagers upside the head with various weaponry break down and open up is incredible. Hodder doesn’t hold anything back, and that makes To Hell and Back something truly special. The horrors of his poor treatment following the accident are very difficult to listen to, as is the immediate aftermath.

Of course Hodder’s wonderful career is also covered, if a little skimmed over. The documentary covers Friday the 13th Part VII: The New Blood, Jason Goes to Hell: The Final Friday and Jason X, and also opens up about his disappointment over not being cast in Freddy vs. Jason. We then see his work post-Jason – including Adam Green’s Hatchet series – and how he has started getting more acting roles without make-up. Hodder is a rare example of an actor. He doesn’t let the prosthetics and make-up do all of the acting for him, he brings his characters to life. It’s why his name is remembered for Jason above Ted White or C.J. Graham.

But the key to To Hell and Back: The Kane Hodder Story is the determination and success of the man himself, overcoming a terrible tragedy and the ensuing battles. Hodder is a revelation in this documentary, and director Derek Dennis Herbert does a fantastic job of getting the most out of him. It’s wonderful – particularly at FrightFest – to see someone who champions the horror franchise and community so passionately overcome these horrible obstacles. At the time of writing, Herbert is struggling to get distribution for To Hell and Back, and this writer hopes those issues are resolved because this is a documentary that every horror fan will want to see.