Riverdale creator Roberto Aguirre-Sacasa has sparked speculation about a potential crossover between The CW’s DC Comics series Supergirl and its Archie Comics show, sharing a photo of Melissa Benoist’s Girl of Steel sitting with Betty Cooper (Lili Reinhart) and Veronica Lodge (Camila Mendes) in a booth on the Pop’s Chock’lit Shoppe set of Riverdale.

Aguirre-Sacasa posted the following, complete with the caption: “Look who dropped in to #Riverdale for a visit! Worlds colliding!! Can a crossover be far behind??” 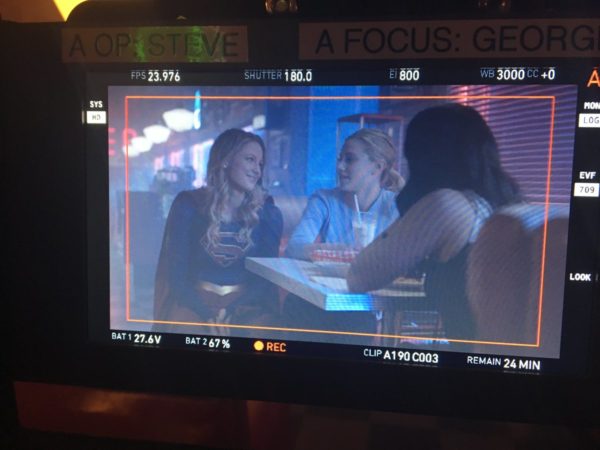 Given that both shows film in Vancouver, it’s entirely possible that Benoist was just paying a visit to the Riverdale set (as she did during the first season), but it’s interesting that she’s in full costume. Assuming we aren’t getting a cross-company crossover, perhaps it’s for a promo for the new seasons?

Supergirl season 3 is set to premiere on October 9th, followed by the premiere of Riverdale season 2 on October 11th.