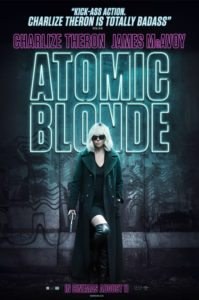 An undercover MI6 agent is sent to Berlin during the Cold War to investigate the murder of a fellow agent and recover a missing list of double agents.

All the hallmarks to compare Atomic Blonde to John Wick are there: one-half of the John Dick directorial team, the stunt-choreographer-cum-filmmaker David Leitch is directing this film; the protagonist is an efficient, reputable, and skilful killer; the fight sequences are visually incredible, with Atomic Blonde offering one sequence that many will talk about long after seeing it (more shall be discussed later); it has the retro-aesthetic reminiscent of action years from the 80s and 90s, which in Atomic Blonde‘s instance the film is set in the late 80s; Charlize Theron signed-up to do Atomic Blonde because she greatly appreciated John Wick. Yes, on the surface it looks to be inspired by John Wick, but Atomic Blonde is much more than that.

Unlike Leitch’s prior outing, Atomic Blonde has a greater breadth of character and plot.

M16 Agent Lorraine Broughton (Charlize Theron) is being interrogated by her superior Eric Gray (Toby Jones) and CIA agent Emmett Kurzfeld (John Goodman) over her involvement in the missing of a top-secret, highly dangerous file of high-ranking names, and the death of MI6 Filed Agent James Gascoigne (Sam Hargrave). The film unfolds through her confessions, detailing her time in Berlin, and her meetings with debauched “feral” agent David Percival (James McAvoy).

Where the film succeeds is the retention of the audience’s attention. The film is a tightly wounded, neo-cold-war espionage story, accompanied by some kick-ass action. The aforementioned missing file, that, according to the paranoid Gray would maintain the cold war by another 40 years if placed in the wrong hands, was last held by a Stasi defector Spyglass (Eddie Marsan). So high are the stakes as everyone fights to grab this list, to either destroy or possess it, that audiences are invited to also distrust everyone.

Charlize Theron portrayal of Broughton rests on this balancing act between a self-knowing, anti-heroic archetype, and a damaged field agent with battle scars to prove it. Our introduction to her is of her rising out of the freezing cold bathtub, through the floating ice-cubes, and an over shoulder shot of her back covered in scars. As the unfolding narrative is told in flashback, audiences are preempted for some brutal action. On the flip-side, there is her wit. Broughton is approached at a bar by Aleksander Bremovych (Roland Møller), but it’s unclear as to whether Bremovych knows her. Theron portrays such deciphering and standoffish through her eyes, able to both internalise the seriousness of the situation, whilst maintaining a cool detachment. Even when Delphine Lasalle (Sofia Boutella) interjects to “save” her from Bremovych, Broughton doesn’t let her guard down. Theron’s performance elevates this film into something more than a John Wick clone.

Now that’s not to say the action sequences are lacking anything – far from it! Theron looks to put her body into (most) of the action sequences, and the payoff is there. Every duck, turn, punch, and shot fired is shown on-screen in its full glory. There is an action sequence that involves a staircase (those who have already seen Atomic Blonde will know precisely what I’m talking about here) where it’s clear Theron is physically pushing herself. Theron transcends her character from a badass heroine to a gritted survivor. I mentioned ‘most’ because there is one scene that sees Broughton put on a mask. It’s apparent that Theron wasn’t able to do the stunt, so they covered her face to have someone else perform it for her. This moment may pull audiences out of the film. (Unless it’s discovered it actually was Theron performing those stunts, in which why did the film decide to cover her face?)

The rest of the supporting cast give terrific performances as one would expect. McAvoy looks to be having a blast portraying the brash, cocky, quasi-boozing Percival, as is Møller portraying the dangerously psychotic and unhinged Stasi agent who still believes in the communist cause. Marsan once again proves to be the most overlooked, underappreciated UK actor working today, as his meek, inward performance contrasts beautifully against all the over-the-top characters that populate this world.

Atomic Blonde is the action cinematic fix you’ve been waiting for.