Continuing from the Dark Elves Campaign gameplay video released the other day (see here), Creative Assembly have released a new video showcasing a battle between the Dark Elves and High Elves in the upcoming Total War: Warhammer II.    During this gameplay video we see Malekith the Witch King lead his forces into battle to interrupt the High Elves second ritual.  Watch the video below… 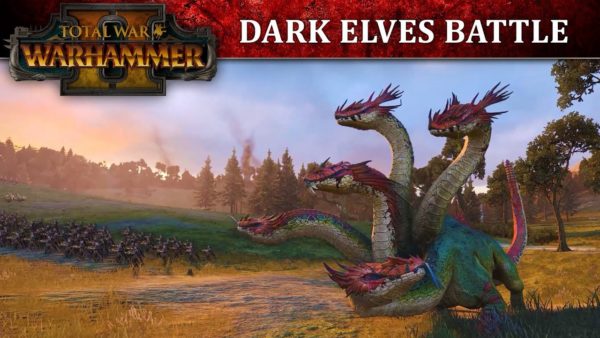 During this campaign battle we get to see a wide variety of units from the Dark Elf roster from the insane and blood thirsty Witch Elves to the terrifying flame firing Hydra and we also treated to a first glimpse of the adorable looking Moon Dragon fielded by the High Elves.

Thanks to the preparations of moving a Dark Elf Black Ark into support range during the campaign video, we get to see earth shaking bombardments rain down on the High Elf lines.  Who are you hoping to win? Leave a comment below before watching the video.