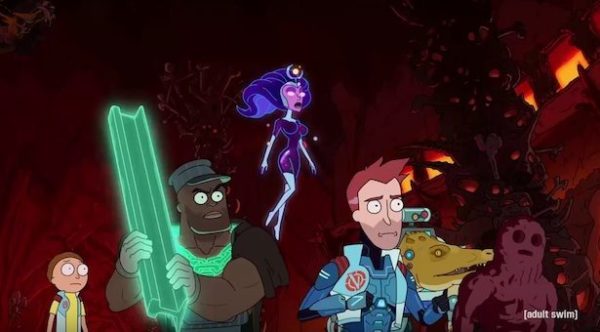 Ever since Rick and Morty returned to our screens two weeks ago, the show has been very heavy on pop culture parodies. The first episode Rickmancing the Stone was a parody of the Mad Max franchise and the post apocalypse sub-genre in general, while last week’s episode Pickle Rick was a parody of today’s action movies, particularly The Raid and John Wick. This week it was the turn of the superhero genre in Vindicators 3: The Return of the Worldender.

The episode began with a nice throwback to Season One – Morty cashing in his coupon to choose one in every ten adventures for the duo, opting to answer a literal call to adventure from The Vindicators, a group of intergalactic superheroes.

The Vindicators need Rick and Morty’s help to destroy a villain called The Worldender, who, as his name suggests, quite literally destroys worlds. It’s a clear nod to the generic nature of superhero villains and while some may say that it’s a dig at The Avengers franchise in particular, for me, its strength was that it didn’t need to pick a particular target, instead deciding to just take on the genre in general.

Of course, though, the episode had to have a few twists in store and the best one of those was the episode’s main antagonist reveal. As it turns out, Rick thinks that The Vindicators are a bunch of idiots, and they don’t think a great deal of him either; this clash leads to Rick going on an almighty bender the night before the big mission. The next morning, when the group arrive to fight the Worldender, it turns out that he has already been killed, by a drunken Rick. Rick then appears on a video screen, revealing that he has created a bunch of Saw-like activities to show the group how useless they really are. The problem is, though, that Rick, now sober, can’t remember what tasks he set up for the group.

This was a smart twist from the show for a number of reasons. Now that the Council of Ricks and the Galactic Federation are defeated, the show has a clear lack of antagonists, and while weaker writers may have thrown up another random villain, Dan Harmon and Justin Roiland decide to take Rick’s nihilistic tendencies to a new level, turning himself into his own literal enemy.  It also allowed the show to explore Rick’s personality more; the idea that he may actually care about his family was toyed with several times through out and the fact that when he was drun, he couldn’t care less speaks volumes about where his character is at the moment. 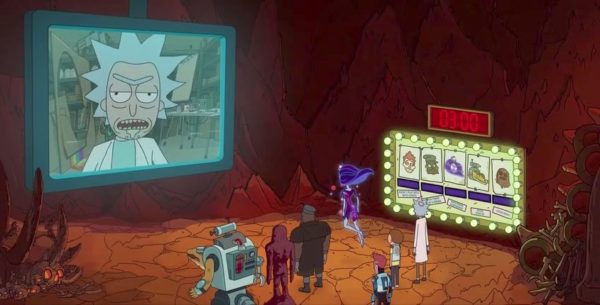 The ensuing scenes were also hilarious, with The Vindicators destroying themselves one by one, with the show even saving one last swerve right until the end in a scene clearly inspired by Alan Moore’s The Killing Joke. The Vindicators was a great example of how the show, even after three seasons and hundreds of fan theories, can still find new and innovative ways to surprise us.

The episode also deserves credit for its brilliant character design. The show could have easily given us very generic looking superheroes, but Harmon and Roiland showed their imagination, giving us superheroes with out-right ridiculous powers and abilities, and while it could be said that ‘Noop Noop’ looked slightly like fan favourite Mr Poopy Butthole, his moments were utterly hilarious, so I’m willing to let them off. The show also featured some great voicework from Christian Slater and Gillian Jacobs, the second Community star to appear in the show this season.

Vindicators 3: Return of the Worldender was a dark, surreal and utterly hilarious of the current superhero movie trend and further cements Roiland and Harmon as two of the finest satirists working in TV right now.

What did you think of The Vindicators: Return of the Worldender? Let us know in the comments below and let Liam know on Twitter @liamhoofe