The next big update coming to GTA Online is called Smuggler’s Run, a title that is a nod to one of Rockstar’s earlier titles released back in the day on the PS2 and Gamecube.  Smuggler’s Run places the focus on flight, particularly carrying certain cargo between Los Santos and Blaine County and will be arriving on the 29th August.  A new trailer has been released to accompany the announcement and can be watched below… 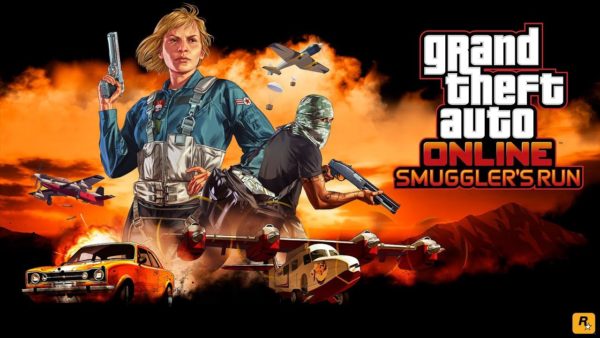 With Smuggler’s Run players will have access to a whole range of new planes, choppers and even ultralights for transporting their illicit cargo.  The update also opens up new business opportunities and new means of getting rid of rival gangs.

The new range of aircraft will all be customisable and to enable you to show them all off there will be an expansive new hangars where all the aircraft obtained can be stored.  The hangars will also be a place where you can obtain missions and generally manage your smuggling operation.

Rockstar have also announced that they will be bringing a brand new type of race to GTA Online this autumn, one which will require you to have the best possible skills at controlling land, sea and air vehicles.  This new race will strategically place checkpoints that will automatically change your vehicle type to match the next section of the course.

Smuggler’s Run will be available on Tuesday, August 29th.