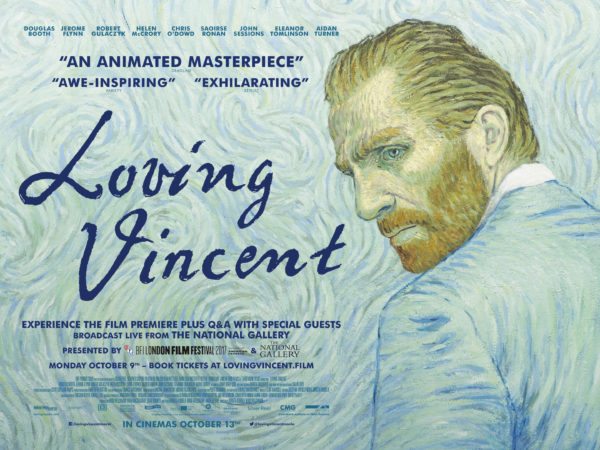 A new UK trailer has debuted for the upcoming fully-painted biographical animated feature Loving Vincent. The film explores the life and controversial death of the Dutch Post-Impressionist painter Vincent Van Gogh, told by his paintings and by the characters that inhabit them, and features a cast that includes Douglas Booth, Jerome Flynn, Saoirse Ronan, Helen McCrory, Chris O’Dowd, John Sessions, Eleanor Tomlinson, and Aidan Turner; watch it below…

The life and controversial death of Vincent van Gogh as told by his paintings and by the characters that inhabit them. Beginning a year after his demise, this portrait of the artist is built via a series of interviews conducted by Armand Roulin (Booth) – a regular model for the artist’s portraits – who becomes obsessed with van Gogh’s death, caused by a bullet wound to the stomach. Was it an accident? Was it suicide? LOVING VINCENT sets out to explore one of art’s great mysteries.

LOVING VINCENT is the world’s first fully painted film, with every one of the 65,000 frames of the film an oil-painting hand-painted by 125 professional oil-painters. LOVING VINCENT was first shot as a live action film with actors, and then hand-painted over frame-by-frame in oils. The final effect is an interaction of the performance of the actors playing Vincent’s famous portraits, and the performance of the painting animators, bringing these characters into the medium of paint.

Loving Vincent is set for release on September 22nd in the States and on October 13th in the UK.