Ok, so it’s taken 11 episodes, but it’s done it – BoJack season 4, you’ve broken me. An episode about Beatrice, BoJack’s mother was clearly coming, but wow, this was really something. It’s rare a TV show is powerful enough to bring a tear, but Time’s Arrow managed it on several occasions. 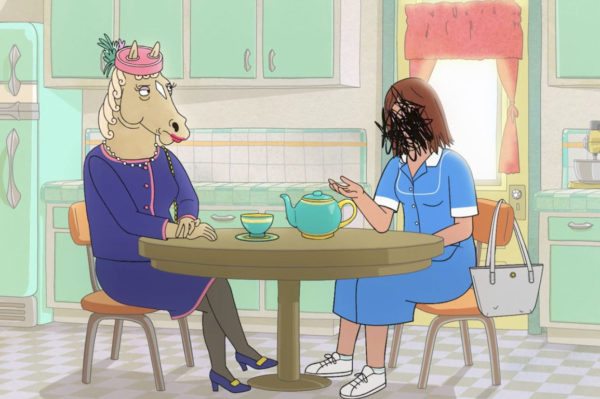 Beginning with BoJack and his Mom sat in the car on the way to the care home, the episode then switched to how Beatrice saw the world, revealing BoJack to be, in her eyes, Henrietta, her former housemaid who for reasons that become obvious as the episode wore on, had a scribbled out face. Henrietta was clearly someone her brain wanted to forget.

We then jumped back to Beatrice’s childhood. Following the events from the flashback in episode 2, Beatrice’s father is ruling over the household, forcing Henrietta to accept her duties as a woman and stop wasting time on books and intellectual pursuits. It also transpires that her obsession with weight, that has been so tragically passed down to Hollyhock, began here as well – as her father constantly reminds her to look her best, encouraging her to keep slim for the boys and not to worry about anything else.

We then skip forward to Beatrice as a teen. Her father, still insistent on her playing no role other than that of a doting housewife, has set up with her a ball, where she will effectively be sold off to the highest bidder, a man who just so happens to be the ideal business partner for her Father.

During these balls, she meets BoJack’s Father, Butterscotch – a young, bohemian dreamer who has grand plans to move to California and be the next big voice in The Beat Generation. The parallels, aside from the voice (both characters are voiced by Will Arnett) between BoJack and his father are obvious and the episode really drills it home as Beatrice, with her dementia ridden mind, sees BoJack when she is talking to Butterscotch. 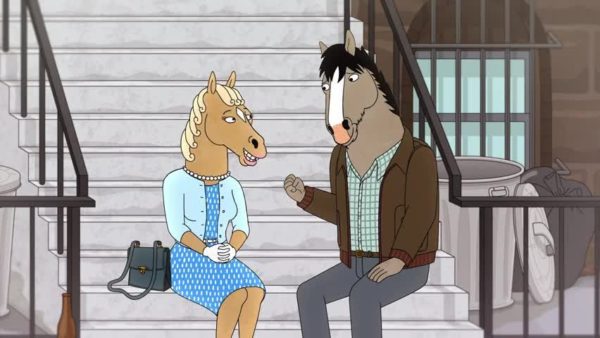 After a steamy night of passion in a car, Beatrice falls pregnant with BoJack and it is here where the events of the episode begin to get even darker. Before BoJack is even born, his father refers to him as an ‘inconvenience’ and we see the two discuss having an abortion, before ultimately deciding to escape to California together in the hope of a better life.

From then on in, things just get worse for BoJack and his family. BoJack, who is always dressed as a sailor, for some reason, is nothing but a burden on his family. His Father, forced to work terrible jobs to make ends meet, blames BoJack for him never having finished his great novel, while Beatrice slowly turns into a cynical old hag – chain-smoking and popping pills, while reminded her son how he ruined her life, and her body.

We then see an exchange between BoJack and his mother from a few years back, where she tells him ‘All the sacrifices I made, so you could do this’. It’s a powerful line, one that shows her contempt for BoJack, and her shame at having a son who she views as a failure.

The episode’s biggest twist comes, however, when Butterscotch impregnates Henrietta and Beatrice convinces her not to make the same mistakes she did, and give the baby up for adoption. A baby that looks an awful lot like BoJack’s ‘daughter’ Hollyhock.

The episode finishes with BoJack talking to his mother in the care home, telling her she is in a happy place, surrounded by her family and in some respects, putting her out of her misery. 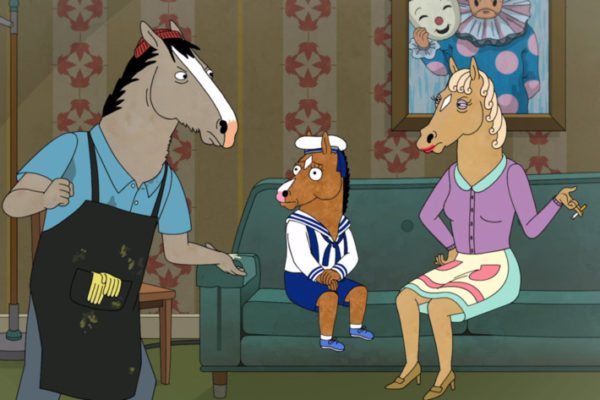 Time’s Arrow may be one of the show’s greatest ever episodes. It’s a devastating character piece and a real examination of how BoJack has ended up the way he is, and how the mistakes of previous generations are still being felt today. It’s also an incredibly accurate examination of what it is to have a family member with dementia, BoJack does what he can to make her feel better, despite the fact that she can’t remember him. The way her mind is regressing is devastatingly accurate and it brought a tear to my eye in the closing scenes.

What is so astonishing about BoJack is the way it has managed, so often, to make even the worst of characters feel empathetic, and it strikes once again her. BoJack’s Mom has been something of a villain in previous seasons, but this episode reminds us that we are all humans and that we are often, just a product of our upbringing and our parent’s mistakes. I’d say it’s an achievement for a show about anthropomorphic animals to do that, but it’s no less than what we expect from a show as exceptional as BoJack.

Time’s Arrow is BoJack at its most powerful. It’s thought-provoking, intense television that shows what a masterful excuse for a TV show BoJack Horseman really is. It’s one of the finest episodes of television I’ve seen in 2017. Bravo, BoJack, bravo.

What did you think of ‘Time’s Arrow’? Let us know in the comments below, and let Liam know on Twitter, here- @liamhoofe