As season 4 episodes go, episode 8 – ‘The Judge’ slows things down a little bit before launching us into the home straight, opting to focus on several smaller plots after the emotional rollercoaster that was episode seven.

There are three plot threads running through the episode, so let’s start with BoJack’s. As BoJack’s relationship with Hollyhock continues to grow, so too, does his paternal instinct. In the episode, while BoJack is off filming a ridiculous TV show headed up by Felicity Huffman, Hollyhock finds herself falling for the set’s young intern, Miles. Their relationship blossoms (off-screen), much to BoJack’s dismay, and in true Father-like fashion, he begins to investigate what Miles’ intentions are. The plot is a nice little distraction from the show’s bigger themes and is an effective way of showing BoJack’s development from the beginning of the season. 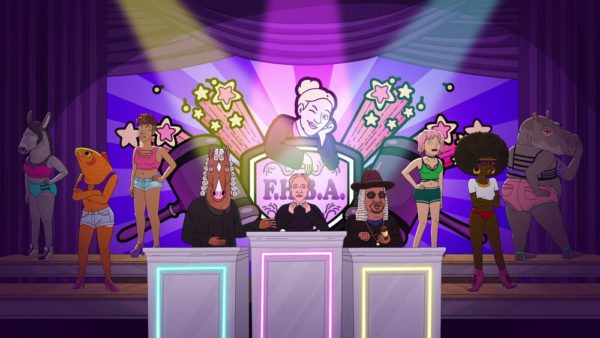 A tiger, or horse, in this case, never changes his stripes though and BoJack finds himself attempting to set up the intern to prove to Hollyhock that he is just messing around. This backfires, though, when BoJack realises that his daughter’s wannabe lover does actually care for her. Then, in a cruel twist that only BoJack could chuck, he realises that while Miles is interested in Hollyhock, he is much more interested in progressing in his career. Miles propositions BoJack, telling him that if he can pass his script onto an agent, he will leave Hollyhock alone. While we never discover if BoJack accepts the offer, we don’t hear from Miles again, so it’s safe to assume he did.

Hollyhock’s mini romance ties in nicely to the growing plotline about her image. Hollyhock has expressed, on several occasions, that she is unsure about her appearance, and that, especially in Hollywood, sorry, Hollywoo, she finds herself comparing her body to that of other woman’s Hollyhock’s confidence issues are clearly going to continue to grow over the season, and it becomes increasingly clear as the episode wears on, that BoJack is incapable of helping her deal with them. 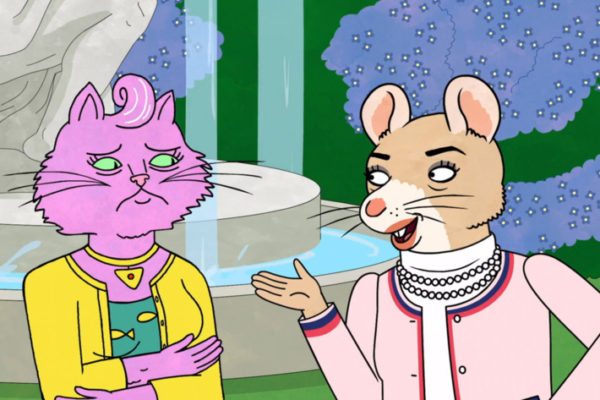 The episode’s second plot is based around Princess Carolyn going to visit Ralph’s well to do family. Ralph is desperate for the meeting to play out well – his family are wealthy mice, while his girlfriend is a cat – it’s a situation only BoJack could chuck up but it plays out perfectly. While Ralph’s family initially seem accepting, if not a little apprehensive about Carolyn, their true colours begin to shine during a family meal.

It just so happens that Ralph has invited Carolyn around to visit during an annual holiday – a holiday which exists purely to express hatred for cats: ‘The Feast of St Squeaky’. Despite his reassurances that his family don’t hate all cats, Ralph’s words fall on deaf ears, as his family’s prejudices begin to rear their heads more and more.

Watching the scenes here I was reminded of the movie Get Out and the parallels are fairly obvious. The episode deals with racial tension in a way that only BoJack can and the scene, especially at the end, when Ralph and Carolyn leave, is particularly powerful. Ralph and Carolyn are a shining beacon of hope in BoJack at the moment; their relationship and plans for the future are an optimistic turn for the characters, let’s hope that it works out well. That being said, it’s BoJack, and I suspect that Carolyn’s difficulties carrying children are going to return before the end of the season.

The episode’s other plot is an amusing narrative about Mr Peanutbutter and Todd setting up a clowns for dentists company. Todd has been great this season, but aside from in episode 1, he is yet to have a really outrageous subplot. That changes here when Todd embarks on his most ridiculous business scheme to date. The scenes are mostly played for laughs and are a nice little aside. They do further Mr Peanutbutter’s storyline, though, as he ends up joining Woodchuck’s campaign as a hype manager to take down Jessica Biel’s increasingly outrageous campaign.

The Judge feels like a change of pace just before the season really kicks into gear. With only 4 episodes remaining after this, it’s a nice way to give us a little bit of optimism before the inevitable misery comes our way.

What did you think of ‘The Judge’? Let us know in the comments below, and let Liam know on Twitter, here- @liamhoofe