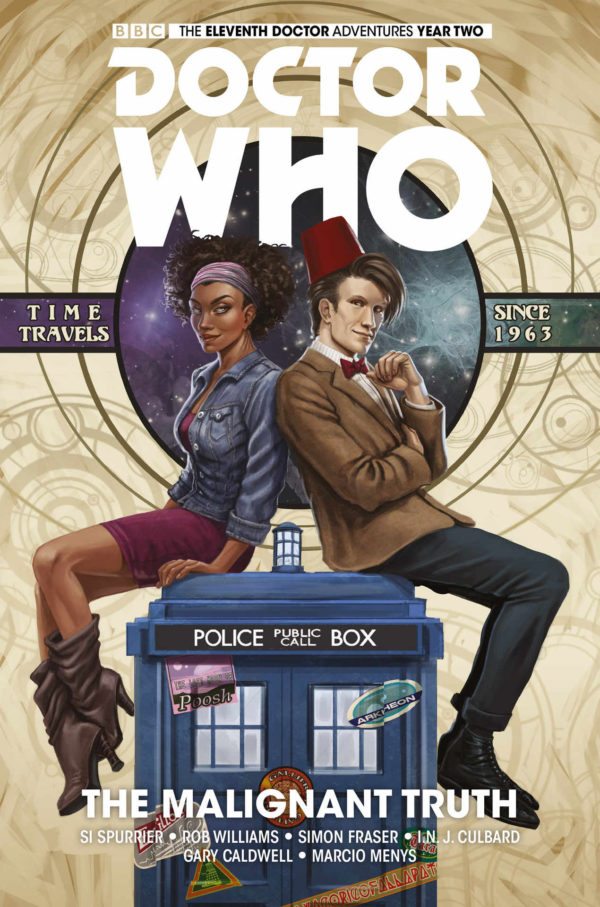 The truth behind the Doctor’s possible-crime revealed! Shocking surprises in store for the Doctor’s companions! The thrilling chase resolved; every mystery unveiled! Don’t miss this final chapter where the Doctor and his companions face… The Malignant Truth!

Confession: I’ve fallen a little behind on the Eleventh Doctor comics.

Which meant that, when I read this collection of comics for review, I was a little bit out of my depth. If you’re looking for a jumping on point, this rather definitively isn’t it; it’s the conclusion of an ongoing arc, which picks up on and resolves quite a few different plotlines. If you’re looking for a Doctor Who graphic novel, probably best to go back to the beginning.

None of which is to say, of course, that it’s not an entirely enjoyable affair in its own right.

The Malignant Truth has a lot of interesting ideas on show; at its heart it follows the story of a Dalek splinter group, the Volatix Cabal. Granted, they’re fairly similar to the Cult of Skaro – but given the Cult of Skaro left a lot of potential unexplored, why not return to the idea? There’s a lot of strong concepts here, and the Volatix Cabal are fairly creepy in their own right. While one does perhaps get the sense that Titan were unable to license the traditional Daleks, limitations like that have always been the mother of Doctor Who’s greatest inventions – and the Volatix Cabal are an invention that feel right at home in the Time War.

Once again, the art style is strong – bold colours, clean lines, and generally good likenesses throughout. Generally speaking, the comic does a reasonable job of capturing the physicality of Matt Smith’s performance; it’s always going to be difficult to translate his performance to a medium he’s not participating in, but The Malignant Truth does as good a job as any I’ve seen.

There are certain weaknesses admittedly. As I mentioned in my review of Supremacy of the Cybermen, I’m inherently suspicious of an overreliance on continuity; undeniably, The Malignant Truth does better at this than its counterpart, but on the flip side, it’s not that much better. In places, too, the writing is sketchy – particularly poorly served is John Hurt’s War Doctor. Somewhere along the line, writer Si Spurrier presumably tried to make his dialogue more authentic by hewing close to the dialogue the character had onscreen. Usually this is good advice, but I can’t help but feel Spurrier overdid it – particularly with the repetition of “in the name of sanity”, treating as this Doctor’s equivalent of “Geronimo” or “Allons-y”. After a while, it begins to feel trite – which is a shame, because outside of that, this Time War prologue is fairly strong.

Ultimately, The Malignant Truth was a strong offering from Titan Comics. Undeniably, it’s one that would benefit from having followed the rest of the line more closely – but equally, while it’s probably not the best introduction to the line, it’s certainly made me want to catch up on what I’ve missed. I’d definitely recommend it if you’re already a fan, or if you were looking for an interesting new take on the Daleks.