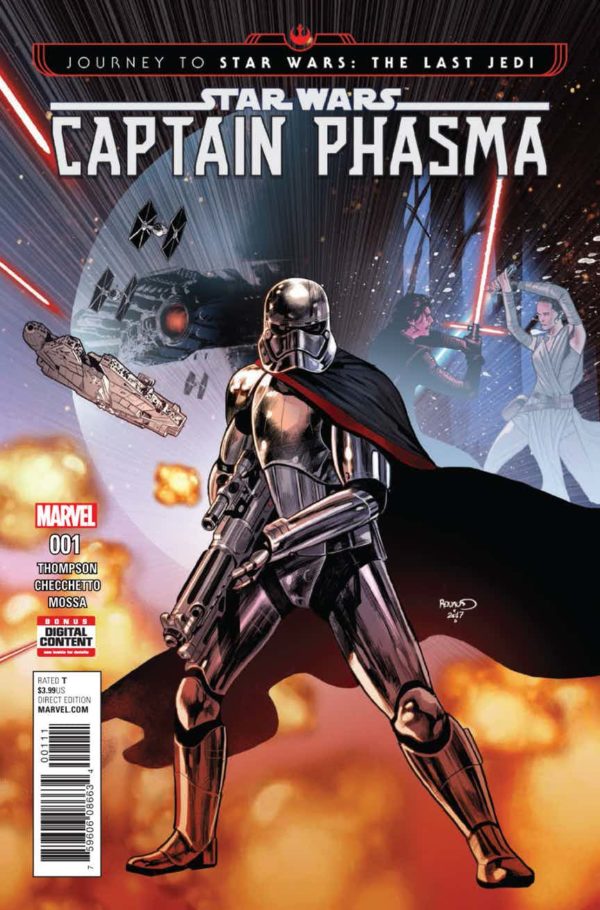 Outside of Kylo Ren, the next heavily promoted character in Star Wars: The Force Awakens was probably the chrome-plated Captain Phasma, played by Game of Thrones’ Gwendoline Christie. Sadly, the film didn’t do the character justice, pushing her to the sidelines before having her shoved offscreen into a trash compactor just as the Resistance attacked Starkiller Base. Thankfully, though, Phasma seems to have more to do in Star Wars: The Last Jedi and Disney and Marvel are ready to explore what a formidable villain she is in Journey to Star Wars: The Last Jedi – Captain Phasma #1.

This series picks up shortly before the end of The Force Awakens, showing her escape from the trash compactor and off of Starkiller. It is a little surprising how the comic begins with Phasma just having escaped, not showing how exactly she melted through the compactor doors, but from there it has a pretty neat story of how she got off Starkiller. Still, it seems a bit convenient that she escaped the compactor through unseen means rather than display her ingenuity as the rest of the comic does.

Writer Kelly Thompson’s approach to the story is interesting as well. The issue begins after the fact, with Phasma seemingly recounting the events in a debrief. It’s an intriguing idea that allows us to see how her mind works, showing the ways in which she stretches the truth to save her own skin since she was partially responsible for Starkiller’s destruction. It helps understand the quick ways her mind works, showing Phasma is much more than just a physical threat.

Marco Checchetto’s art is quite good throughout the issue. His rendition of Phasma looks just as imposing on the page as she does on film. The way her suit is designed to the various tools she has at her disposal are all very well done. For a character who stays masked for the whole issue, Checchetto’s body language with Phasma conveys a lot of what is beneath the armour. He also uses a good level of detail in the background, such as in the explosions, scenery and starships, to really get the sense of chaos on Starkiller across.

It’s a pretty quick read, but Journey to Star Wars: The Last Jedi – Captain Phasma #1 is a nice bridge to the upcoming film as Thompson finally shows just how dangerous the lead Stormtrooper can be. This issue shows Phasma as more than just a lackey, being an adversary with cunning that knows how to look out for herself, even if it means putting other loyal soldiers at risk. Checcetto’s artwork is nicely done and retains the look and feel of the Star Wars universe, especially when he succeeds with a character who is masked for the whole issue. This is definitely a good start to one of the big tie-ins for The Last Jedi.