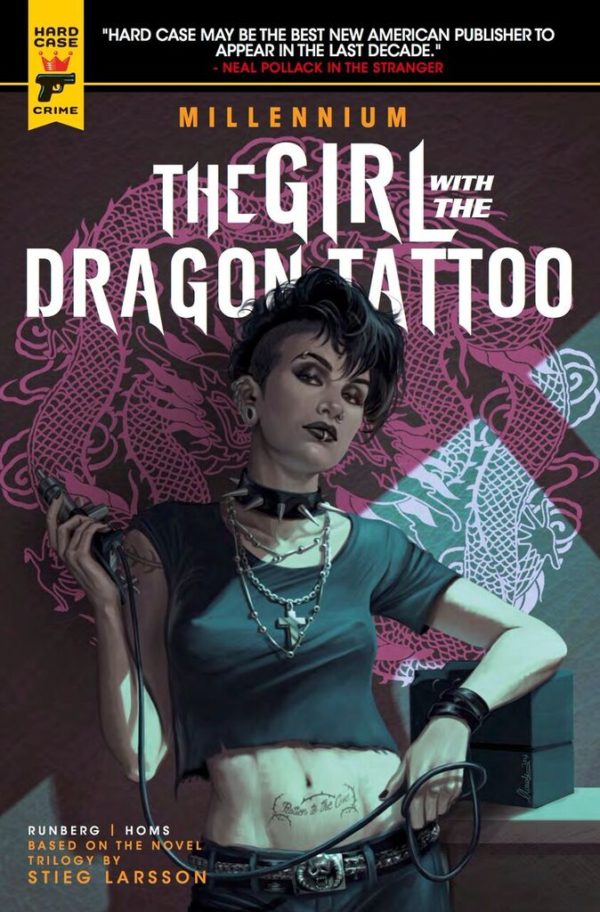 Since its original publication in 2005, Stieg Larrson’s The Girl with The Dragon Tattoo has been re imagined in several different formats. First came the movies, a Swedish version and then David Fincher’s adaptation in 2011, then DC and Vertigo published the story as a graphic novel a year later. In 2013, Belgium writer Sylvian Runberg released another graphic novel adaptation, this time in French,  and now, thanks to Hard Case Crime and Titan Comics, those adaptations have been translated into English for the first time.

What is the most striking thing about Runberg’s take on the story is just how well he has perfectly managed to capture the gritty, nordic noir tone of the original novel. Reading the graphic novel, it looks just as you’d imagined it to when reading the original book. The book’s main artist, Homs, deserves a lot of credit for his work here as well. His illustrations of the character are perfectly rendered and the tiny details added to every scene, especially the character’s expressions, which are a joy to look at.

The most striking of all the characters, though, is the eponymous Lisbeth. Stealing every scene she is in, this version of Lisbeth may be the best version of the character we have ever seen (Sorry, Rooney).  This isn’t to say that the other characters don’t get their due though, with the novel’s other protagonist, Mikael Blomkvist being very well padded out as well. The scenes between the two, in fact, are arguably the novel’s finest moments, with several great quips being shared between the pair.

The Girl with The Dragon Tattoo is not the easiest of stories to adapt, either. The plot is very multi faceted, with a murder investigation, institutionalised abuse, a media scandal and a private investigation all vying for space between the pages. Runberg does an excellent job of knowing when to jump between plot threads, creating the perfect balancing act. Several scenes, in fact, feel they have been taken from an incredibly well edited movie and both Runberg and Homs deserve a lot of credit for their work here.

It is genuinely difficult to find much to criticise about the novel, but it should be said that it is not for the faint of heart. The book has very detailed depictions of rape, violence, torture and murder. It should be noted though, that none of these sequences, despite their graphic nature, ever feel like they are there for shock value and each one helps the story develop effectively.

Verdict: Sylvian Runberg and artist Roms have given us a near perfect adaptation of The Girl With the Dragon Tattoo. Hard hitting, gritting and beautifully illustrated, it is, without a doubt, the closest adaptation of the books you will find.