Bethesda have released a new trailer for their upcoming survival horror title, The Evil Within 2 that introduces Father Theodore, the game’s resident religious crackpot with delusions of godhood.    Meet the Wrathful ‘Righteous’ Priest in the trailer below… 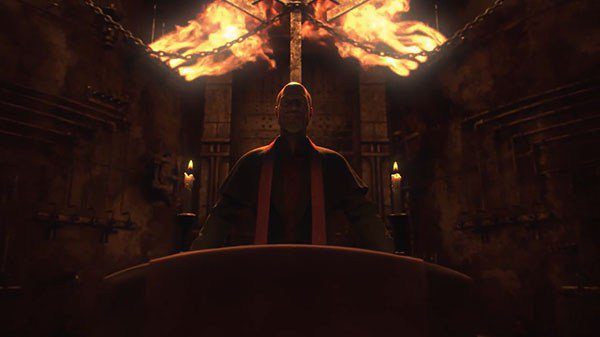 Father Theodore is a character shrouded in a mystery that will be uncovered as players progress through the game, that said, he isn’t exactly a chap you want to trust especially considering he ‘converts’ people to do his bidding with flamethrowers.  He’s also not babysitter material so certainly not the person who you would want to get to Lily, the little girl Sebastian is trying to save.

The Evil Within 2 will be released on the Xbox One, Playstation 4 and PC on the 13th October (which, incidentally, is a Friday).

Of all the characters in The Evil Within 2, Theodore is perhaps the most shrouded in mystery. Any detail about his past pushes into HUGE SPOILER territory. In other words, you’ll have to play the game in order to unlock the secrets he hides. In Theodore’s mind, Mobius’ goals with STEM are misguided. They want to use the device as a means of controlling the populace, but Theodore believes he’s much better suited for the job than they could ever be. He sees STEM as a method for expanding his own influence, and seeks to circumvent Mobius from within their own device.