Despite the fact we’ve had an official poster and trailer in the past couple of weeks, Netflix continues to keep the release date for its next Marvel series The Punisher tightly under wraps. However, it seems Total Film may not have got the memo, as the latest edition of its magazine suggests that Frank Castle’s solo series will hit the streaming service on October 13th.

SEE ALSO: Jon Bernthal says The Punisher will take us to “a dark and brutal” corner of the Marvel Cinematic Universe 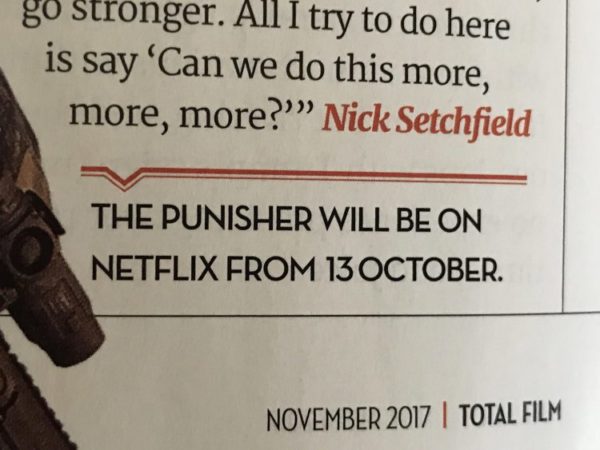 Previously, director Dearbhla Walsh had suggested that the show would hit Netflix in November, so it’s possible that Total Film has made an error here. Nevertheless, we should expect an official announcement soon.

UPDATE: While we can’t confirm the 13th as the exact date, we’re also hearing that The Punisher will indeed arrive on Netflix in October.

SEE ALSO: The Punisher showrunner explains how Frank will be relatable