One of the things that fans look forward to with The CW’s superhero universe is the annual crossovers between the shows, which only gets bigger each year as the network adds more heroes to the Arrowverse.

With this year being a true four-part crossover between The Flash, Supergirl, Legends of Tomorrow and Arrow, The CW has announced the title as ‘Crisis on Earth-X’, as well as unveiling a poster illustrated by comics legend Phil Jimenez. 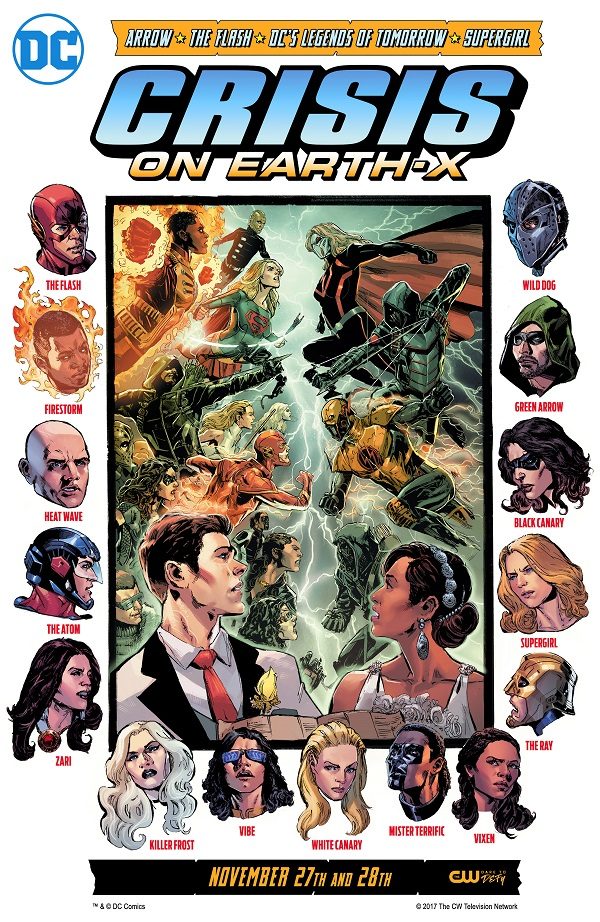 The official synopsis for the crossover is:

With all of the heroes in town to celebrate Barry and Iris’s wedding, villains from Earth-X crash the festivities with a deadly agenda.

“We conceived this year’s crossover to be evocative of the annual Justice League/Justice Society crossovers we grew up with and looked forward to as kids,” said executive producers Marc Guggenheim and Andrew Kreisberg. “Phil was the perfect choice to bring the comic book cover iteration of this idea to life. You can count on one hand the number of artists who could compellingly represent so many characters in a single image. Phil is one of them. And his design invokes the cover of Justice League #207, which was the 20th Annual JLA/JSA crossover. Our ten year-old selves are in heaven.”

The crossover begins on Monday, November 27th with Supergirl followed immediately by Arrow. It will the continue on Tuesday, November 28th with The Flash and Legends of Tomorrow.