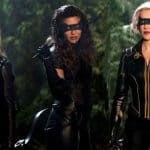 While the Arrowverse is soon about to expand with the launch of the Supergirl spinoff Superman & Lois, Deadline brings word that The CW has opted against moving ahead with another spinoff in the female-fronted Green Arrow and the Canaries. The Arrow spinoff, which aired a backdoor pilot during the show’s final season last January, […] Red Stewart presents the best superhero vs superhero fights… Just because you claim to be a representative in the fight against good and evil doesn’t mean that you’re going to be accepted by others in your community. Superheroes often come from multiple backgrounds, which means their perspectives and point-of-views about things are going to be […] Arrowverse EP Marc Guggenheim has unveiled a new piece of concept art from The CW’s latest DC superhero crossover event Crisis on Infinite Earths which gives us a look at Oliver Queen’s final act of heroism as he sacrifices himself in order to save the multiverse from the Anti-Monitor; take a look here… SEE ALSO: […] Warner Bros. has announced the home entertainment release of the eight and final season of the DC superhero series Arrow which arrives on DVD and Blu-ray on April 28th; check out the cover artwork and feature details below…. BURBANK, CA (February 5, 2020) – After eight remarkable seasons, Warner Bros. Home Entertainment and DC mark […] Jessie Robertson reviews the final episode of Arrow… After eight seasons,The CW’s first “superhero” show is the first to come to an end. How did this finale send off our redeemed hero, despite the fact he’s already been dead for two episodes? ‘Fade out’ is a conclusion, but also a rebirth for so many reasons. […]

Following on from the official promotional images for Arrow’s finale, The CW has now unveiled a promo for the climactic episode of the Arrowverse-launching show, entitled ‘Fadeout’, which sees the friends and colleagues of Oliver Queen paying tribute to the Green Arrow. Watch it here… SEE ALSO: Arrow Season 8 Episode 9 Review – ‘Green […]