With the embargo for set visits on Thor: Ragnarok lifting, we’ve now got some new details on the upcoming Marvel blockbuster – specifically, it’s connections to Avengers: Infinity War and Guardians of the Galaxy, as well as its Planet Hulk influences. 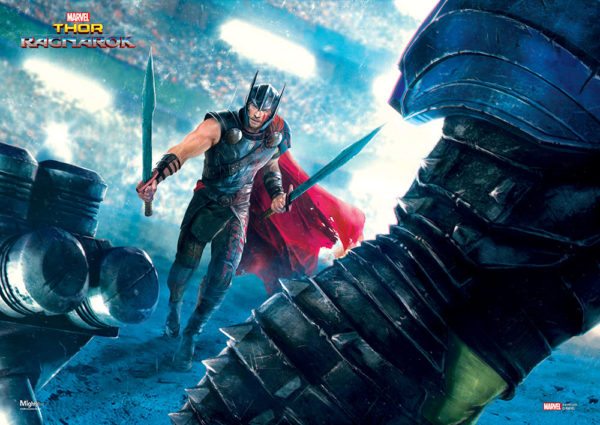 Speaking to Collider, leading man Chris Hemsworth teased how the film will lead into next year’s Infinity War, stating that: “We didn’t want to get bogged down in Infinity Stones and da-da-da-da because I don’t even understand that stuff a lot of the time… I spoke to The Russos before I even had the script for this and said, ‘How does [Thor: Ragnarok] link into [Avengers: Infinity War]?  What can we look out for?  How do we continue this time?’… Without giving anything away though, [Thor: Ragnarok] definitely bleeds nicely into those.”

Meanwhile, in an interview with Screen Rant, some concept art for Thor: Ragnarok featured an appearance from the Guardians’ Milano, with producer Brad Winderbaum seemingly indicating that we may see a potential cameo from Star-Lord and company: “We’re definitely leaning into Jack [Kirby] more heavily than Guardians. There are elements of Guardians that will work their way into our film, both stylistically and narratively. In the sense that, like all the Earthbound heroes feel like they’re living and breathing in the same air, certainly now that we’re in space it feels, in a very MCU way, that we’re living and breathing in the same air.”

Winderbaum also discussed how the Planet Hulk storyline served as an inspiration for the film’s plot, adding that: “In the earliest development of Thor, we were looking at Planet Hulk as inspiration, maybe not even to integrate the Hulk into the franchise but the idea of a planet where there’s gladiatorial games as being a Thor predicament. It really was a cool idea to us. Somewhere in the early conversations, when it looked like it was going that way, it was a no brainer. It actually started off as like, ‘…could we have Hulk in there too?’ And then as soon as that spark ignited, it ignited kind of an idea machine. And suddenly [Hulk] was married to the plot.”