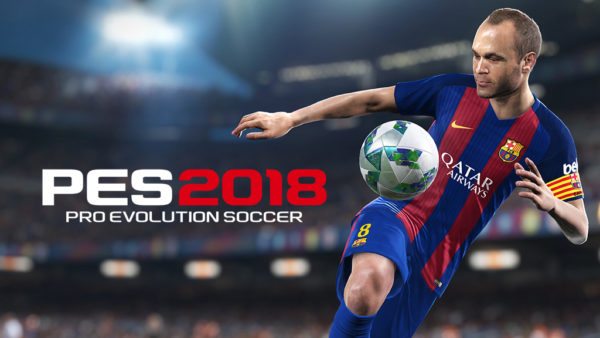 Footie season is back proper and there was much rejoicing. Konami’s heavyweight, PES 2018, is here, with EA’s FIFA 18 just around the corner for some added spice. For now though, PES gets a few weeks in the spotlight ahead of its rival and I have to say, playability wise, I think this is the best PES has been in years. Last year was good. This year, I would go so far as to say it feels like the ISS and Pro Evolution Soccer of old. Bold statement I know, but it’s been a joy to play so far!

It’s been the better part of 10 years since I’ve proper played Konami’s beast. It was my go to footie game for years until EA started to chip away at their dominance from Euro 2008 onwards. PES 2018 though, it impresses me in spades in its core gameplay and infuriates me in everything that surrounds it.

There’s plenty of different ways to play PES this year, with the inclusion of 2v2 and 3v3 games alongside staples such as the Master League, Be a Pro, and myClub not to mention the official and unofficial tournaments and leagues. That’s a lot of football to suit anyone’s preferences. It’s all easily accessible too, and not as confusing as the menus can sometimes get with FIFA.

Getting into the nuts and bolts of the game, the granularity of customisation across formations, play styles, free kicks, player positioning etc is still there before you’ve even kicked a ball. Only if you want to right enough. Konami has always been good at letting you dabble as much or as little as you want with how your team plays before you take to the field and this year is no different. I must admit, I’m not much of a tinkerer and tend to stick with the simple settings but it continues to be a strong asset of the game that gives you the ability to change if you need.

On the pitch everything feels great, although granted it took me some time to get out of FIFA mode. I had some particular trouble with the player switching and automatic control of the players by the CPU, but I’d put that down to understanding the game rather than any fault of the game mechanics. Once I had settled into the way the game, the passing felt crisp, weighted and solid as I pinged the ball around. Long ball cross field passes look majestic as they fly overhead, players with the skill would bend ground passes to their team mates and it all looked like a bonafide game of football. Sadly my own team, Dundee United, aren’t in PES for some unbelievable reason… so I settled on PSG given their current darling, super club status and found out very quickly that Edinson Cavani is quite the beast up front, especially working with Mbappe and some cheapo bargain buy called Neymar or something like that! 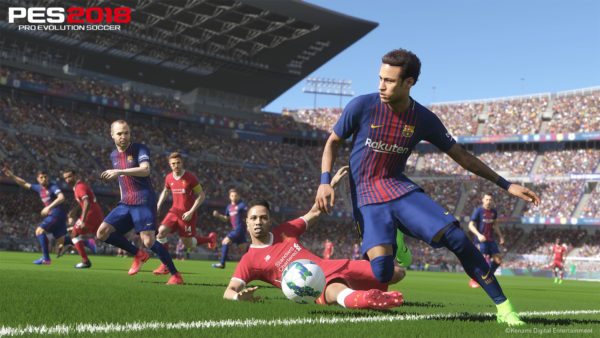 Dipping my toes into the Champions League, there’s nothing to get the blood pumping quite like the rendition of Zadok the Priest. The presentation is super slick and bordering on broadcast quality, especially when you have fully licensed teams taking to the field. Sadly, all this presentation is let down in places thanks to unlicensed teams in the mix and the feel that those players haven’t had anywhere near as much care, attention to detail and love given to them as the big hitters. Commentary as well still continues to be quite the achilles heel of PES too. While Peter Drury does a good job, Jim Beglin at times feels like he’s reading from a script or his voice has been stitched together. That being said, PES has never been one to be overly concerned with license and commentary truth be told. Its focus has always been on making the best football playing game out there and it definitely feels like PES 2018 has achieved this.

I mentioned the slickness of the passing earlier, but the physics of the ball and the players feels very realistic too. Keepers will spill shots, make acrobatically stunning saves and more with very realistic movements, while guys like Cavani, Suarez, et al feel like they are thumping the ball with real purpose when having shots. I always find myself judging a football game on how many times it makes me draw an audible breath, or whoop and holler when a thunderbolt of a shot goes close or even better in. PES 2018 brings those emotions to the fore again in a way I’ve not felt PES has done for me personally in years. Not only that, but defending is an absolute art too. Your timing needs to be perfect to steal in ahead of attackers or know when best to press and bring in extra support. Successfully breaking up a pressing attack can be just as satisfying as scoring a goal here.

Hand in hand with all of this its fascinating watching the AI during a game too. Zoom out to the furthest away camera angle and you can really see the movement of the whole team whether they’re in possession, attacking or defending. Players make runs intelligently (for the most part) and don’t appear to be prone to rogue passes or crazy defending. It’s hugely rewarding when you work possession from a corner in your own half on a breakaway to slot home at the other end. It’s definitely something Konami have down to a fine art here I feel. 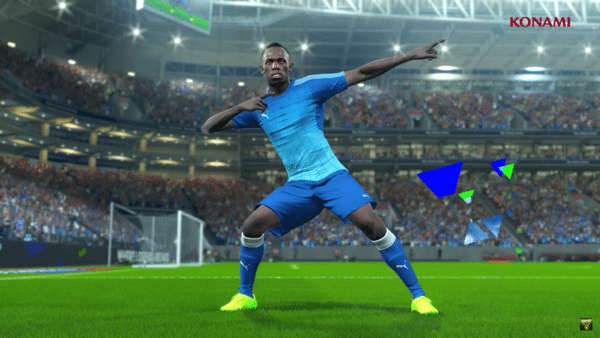 On the flipside of the fabulous football on display though, PES is still let down by issues that have forever been part and parcel of the series. Commentary and unlicensed teams can be overlooked, but it still feels like they haven’t quite found the winning formula across the Be A Pro and myClub areas of the game where FIFA still shines above them. That being said, I can overlook these too when the gameplay is pretty damn close to footballing perfection. PES 2018 is The Beautiful Game made real.

Platform reviewed on – Xbox One