Gaijin Entertainment have announced the release of the 1.71 New E.R.A update for their vehicle MMOG War Thunder.  This latest update introduces lots of new tanks and aircraft, new locations and opens up Rank VI for modern ground vehicles.  A new video has been released to provide more details on this update, and you can watch it below… 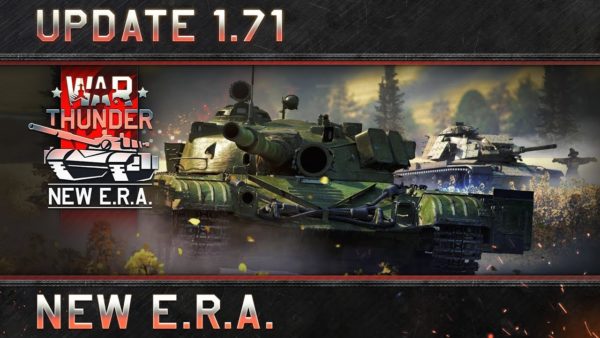 The new Rank VI for ground vehicles features plenty of vehicles from the 60’s and 70’s and see the introduction of technology from contemporary combat vehicles such as Composite and Explosive Reactive Armor (ERA), Stabilised cannons to provide better precision firing, smoke launchers, hydraulic suspension and anti-tank guided missile launchers.  The first of the new tanks to make their appearance for Rank VI are the Chieftain Mk.10 and FV102 Striker for Britain, T-64A and BMP-1 for the USSR, the M60A1 Rise(P) and MBT-70 for the USA and the KPz 70 for Germany.

As well as the tanks mentioned above, there will be 24 tanks and planes released for other Ranks with the new aircraft being the American XA-38 Grizzly designed for targetting heavily armoured ground vehicles and the Soviet Be-6, which is equipped with a total of five 23mm cannons in three turrets and can carry a payload of up to four tons of bombs.

Also included in the 1.71 update are new maps including the most modern map ever released in War Thunder.  Titled ‘Fulda Gap’, this map is set during the height of the Cold War at the inner German border between the Soviet and American bases.  This map features a variety of terrain including an old castle, farmland and fields which allow a diverse range of combat opportunities including close combat and sniper engagements.  Other maps include the Japanese Imperial Garden set in a small Japanese town at the foot of a mountain, and the air battle map Hurtgen Forest.

For more details on this update and the list of vehicles being introduced visit the patch notes here.