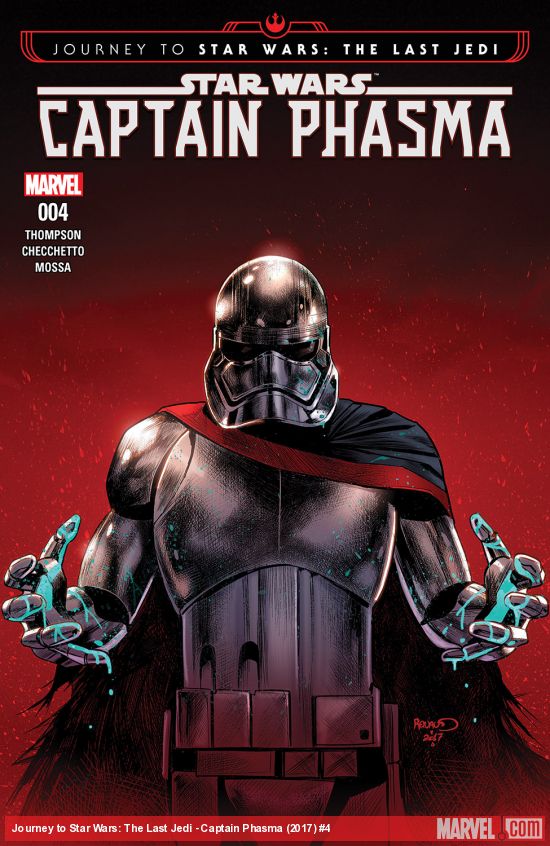 The tie-in story to Star Wars: The Last Jedi concludes as the First Order’s feared captain catches up with her target in Captain Phasma #4. Its a quieter issue than the last one, but offers a bit more insight into Phasma’s mindset and her survivalist attitude that builds off her characterization in the recent Phasma novel.

Captain Phasma #4 is a fairly quick read compared to the other issues. There’s much less talking as most of the pages are devoted to Marco Checchetto’s artwork with some beautiful splash pages and images. The beginning opens with a huge battle as Phasma takes on a hundred enemies before being joined by her followers and from there the story continues with a lot of big vertical and horizontal panels. It keeps the story moving at a brisk pace and is for the better since it doesn’t draw out any of the confrontations for too long.

This also shows how much of a handle Kelly Thompson has with the plot. She doesn’t overstuff the story, simply following Phasma on her journey without dragging it down. Her characterization of Phasma is quite good as well; as said above, its in keeping with Delilah Dawson’s characterization in Phasma, showing her cold attitude as she thinks only about herself. This really does help expand on her character’s choice to ‘help’ Finn, Han and Chewie destroy Starkiller Base and who she’s really loyal to.

The characterization of the other characters is good too. Even Rivas comes across a little sympathetic before Phasma executes him and the series takes Pilot’s idolization of the captain and turns it on its head as she discovers the depth of Phasma’s coldness. It would have been nice, though, if Rivas got a little more time before his end. After all, Phasma and Pilot spent the whole story chasing him and he didn’t evolve much beyond the scapegoat. Pilot’s realization regarding Phasma held some weight to it, but could have been a bit more powerful if further time was spent on her disillusionment.

Checchetto’s artwork is great from start to finish. Phasma looks awesome and intimidating in every panel, even when she’s just standing still. Andres Mossa deserves a lot of recognition to for adding a nice amount of detail to Phasma’s armour, such as the great reflections of her armour during battle or when light hits it. His colour work really complimented Checchetto’s illustrations and made the issue vibrant with his mix of darks and lights.

Overall, Captain Phasma #4 was a pretty solid conclusion to the miniseries. It didn’t go too in-depth in Phasma’s character, but displayed how dangerous and treacherous she really is as she does whatever is needed in order to survive. Fans should enjoy this lead-up to the next film and will walk away with greater anticipation for Phasma’s return in The Last Jedi.