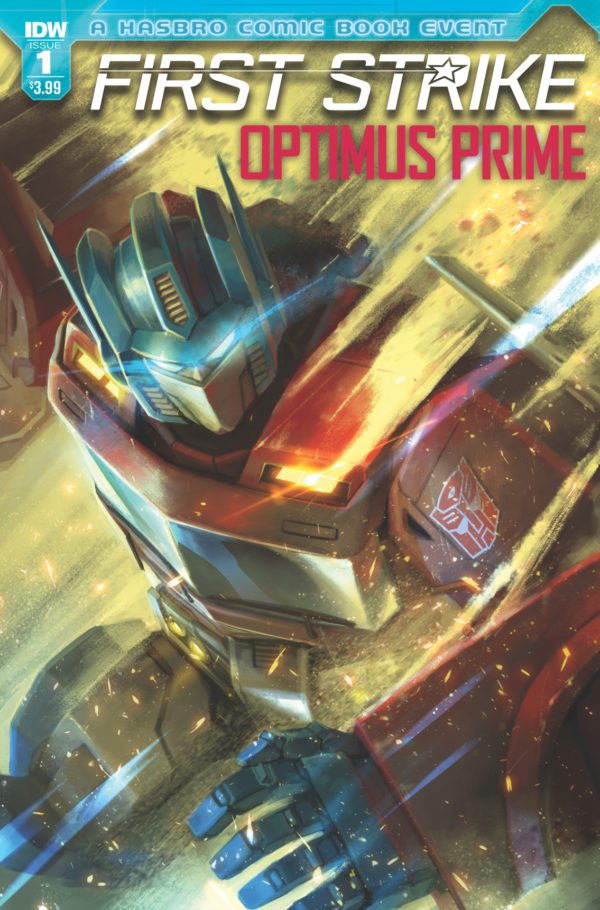 Its not unusual for a big comic book event to have several tie-in issues to the main series, telling companion stories with some of the supporting characters to either help expand the event’s scope or fill in some gaps. What is unusual, however, is to have an issue flash back to the very beginning of the event just after the penultimate issue has come out. That is the case with Optimus Prime: First Strike #1 as it takes place just before and during First Strike #1, showing some different events than the first issue.

In that way, Optimus Prime: First Strike #1 somewhat fails as a tie-in issue. It doesn’t really show anything new from Baron Ironblood’s opening salvo against Cybertron, at least with how it relates to the title character. The issue goes into Optimus Prime’s hopes for the peaceful co-existence between the transformers and humanity as Earth will officially be acknowledged in the Council of Worlds, as does Marissa Fairborn’s hopes. However, writer John Barber doesn’t really explore anything new with these ideas that hasn’t already been explored in either First Strike or the proper Optimus Prime series.

On the other side, though, the issue does explore what other characters were up to during the initial attack and why they haven’t been in the main series. We see Kup and the other Revolutionaries here and their actions as well as continuing the story between Autbot/human hybrid Centurion and the Cobra scientist that created him, Kreiger. It also shows where Arcee has been during this time given that she just showed up to help Optimus in First Strike #5.

Barber introduces a nice little side story that blends some of the past stories in G.I. Joe and Revolutionaries together, including a possible defection from one of the heroes, yet it’s also odd this is brought up here, in an Optimus Prime tie-in, rather than their own title. The fact that it flashes back to the very beginning of the story doesn’t help too much either since we already know where much of the other heroes and villains are way after the events of this issue, though some extenuating circumstances are to blame since IDW delayed this issue by several weeks.

Optimus Prime: First Strike‘s art is fairly good. Both Guido Guidi and John Wycough do some nice character work, making each human and transformer distinct. It’s a little odd to see Optimus Prime suddenly without his iconic faceplate at the start of the issue and why he doesn’t have it when talking to other characters, but otherwise Prime looks as good as ever. Most of the action is clear and concise as well.

Despite the odd timing of the issue’s release, Optimus Prime: First Strike is a good and entertaining issue, though Barber doesn’t really explore any new topics or ways to look at Prime’s viewpoint. The rehash of the importance of this event is somewhat diminished since we’ve heard so much about it before, but it leaves it open at an interesting place to see what happened with the Revolutionaries and Arcee in the upcoming Transformers: First Strike one-shot.