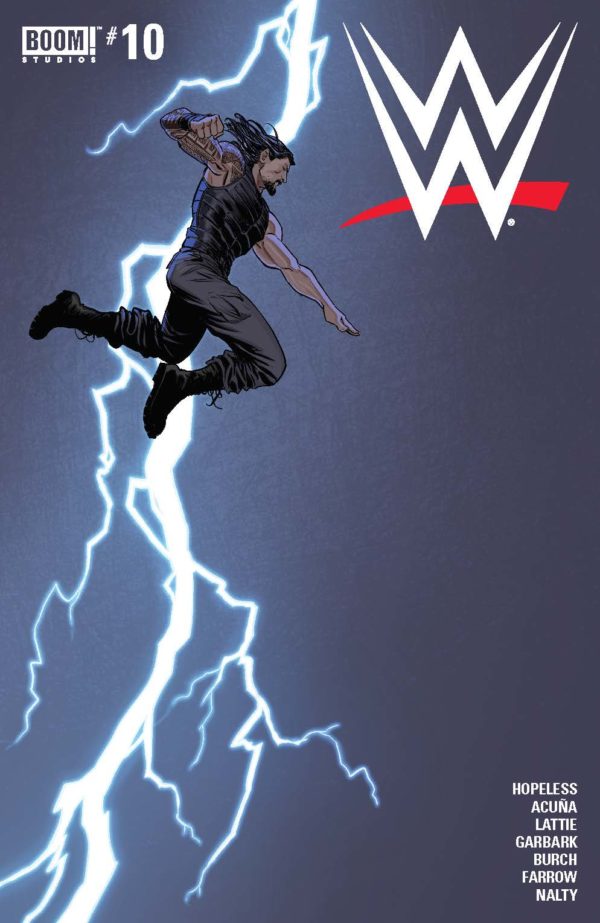 The middle of 2016 was a tricky time for Roman Reigns. From an in-ring perspective, while he had just had a great feud with AJ Styles, he was still getting booed out of every arena he went to and then things took a turn for the worse when he was suspended for 30 days for the use of banned substances.

The timing of the story here means that WWE #10 is dealing with that period in Roman’s story – dealing with the aftermath of his defeat to Seth Rollins at Money in the Bank and Dean Ambrose’s surprise cash-in, and then his 30-day suspension and his time away from the ring.

Okay, credit where it is due – the writer, Dennis Hopeless, comes up with a fun reason for Reigns being suspended (a fight with Dean Ambrose at Stonehenge) and at least they didn’t just avoid the issue altogether, but WWE #10 is just a pretty boring entry into this narrative. The comic focuses on Reigns coping with the events of Money in the Bank while on a WWE tour in London. He decides that he can no longer trust his Shield brothers, so he is going to spend some time with his real-life family, The Usos.

This leads to Reigns and The Usos doing the usual British tourism stuff – visiting Buckingham Palace, going to a ‘soccer’ game, and then visiting Stonehenge. These situations do allow artists Serg Acura to give us some cool background work, and his rendition of London is bright and enjoyable, but for those who are looking for in-ring action, you should probably skip this issue. There is a fight towards the end of the comic – the one between Ambrose and Reigns – and that is beautifully drawn, but the rest of the comic is just lacking in anything exciting. Reigns’ encounter with British children is amusing though, if not just because how ludicrous it is.

The comic’s other story – the short strip based around Becky Lynch, called ‘The Pun-isher’, written by Anthony Burch and illustrated by Becky Farrow – is good fun, though and is nearly good enough to save this issue. It is basically a little story about Becky Lynch beating up a group of fighters and refusing to be one-upped when it comes to making puns. It’s an amusing little sketch that I definitely wouldn’t mind seeing more of.  It would have also been nice to have had some sort of British tie-in, with the main focus of the issue being in London.

Final Verdict: WWE #10 is the weakest entry in the Shield saga. It is basically just Roman Reigns moping around London after losing his title, with little to no focus on the in-ring stuff that has made the other issues such a delight. Buy it for ‘The Pun-isher’ if nothing else.

Liam Hoofe is a writer and a teacher based in Madrid, you can follow Liam on Twitter, here- @liamhoofe