Emma Withington gets hands on with Oh My Godheads…

It’s not EGX without the downright barmy. Fan favourite Gang Beasts was perpetually busy; the fiendish, gelatinous, wrestling jelly babies are something myself and my partner bonded over. I came across Vostok Inc. which on the surface looks like an open-universe Space Invaders. Not only did this mark the day that I accidentally fell in love with the Switch, but was sold to me with the tagline ‘Wolf of Wall Street in space’ – I mean, what? It’s great, check it out, go make some moolah on the PS4, Xbox One, Steam, or the Switch and bathe your intergalactic clients in a hot tub of cash.

Of course, one fresh piece of madness stood out… 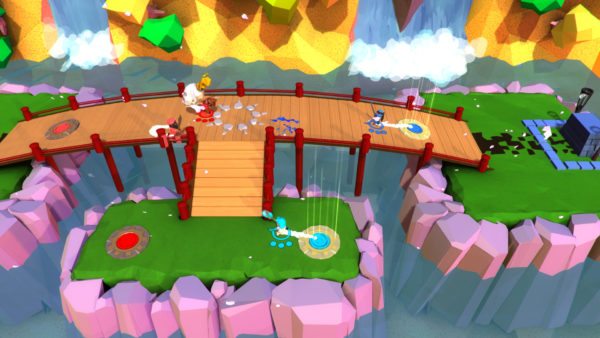 In the Square Enix Collective booth I came across Oh My Godheads, created by Spanish team Titutitech. The main idea behind this multiplayer brawl is capture-the-flag, but with a twist: capture-the-head. I instantly bonded with Sir Fishelsworth, the plucky penguin, as I went up against Dave the skeleton and a couple of polygonal-tastic humans. It was journalist and developer in a head to head – Ha. Ha. – with two fun lovin’ convention goers.

As I dashed around with my behatted aristocratic penguin we battled it out in vibrant, lowpoly 3D environments – from Ancient Greece to Ancient Egypt – to get those Godheads into our goals. A simple premise, sure, but throw explosive pies, environmental pitfalls, colour changing goals, and other puzzling team tactics into the mix, then you’ve got quite the battle on your hands! As if it wasn’t enough to have Dave after you, the titular Godheads all have unique hostile abilities to strike you down; unsurprisingly the Godheads are not keen on being chucked about as a scoring mechanism. For example, the Egyptian God Bastet reverses your controls, Zeus packs a punch with lightning bolts, or face Agyo’s explosive wrath if you hold onto him for too long. This is where football-style passing tactics come in handy – to me, to you! 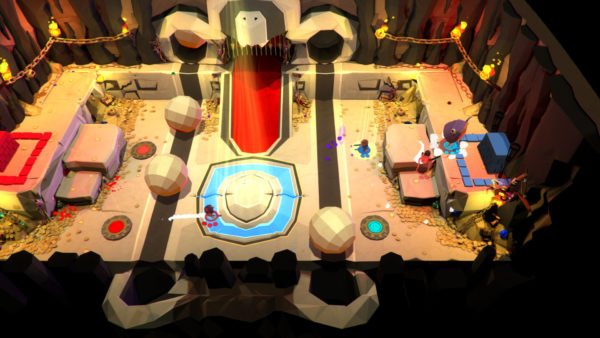 Currently in Steam Early Access, Capture-the-Head isn’t the only mode available in Oh My Godheads. Remove the goals to take out your pals in the deathmatch ‘Last Man Standing’, or become ‘King of the Head’ as you attempt to bear the Gods’ fury, by holding on to their outraged visages for the longest time possible. Titutitech aim to have ten Godheads and levels by release, each adding their own unique challenges – such as penguin-flattening boulders. Oh My Godheads sits as a local multiplayer at the moment, but it doesn’t hurt to have people physically play games with you from time-to-time now, does it?

Oh My Godheads is the world’s first capture-the-head action game for 2-4 players. Capture-the-head is like capture-the-flag, but the flag is an ancient head that’s alive, angry, and after you! Players fight with friends to capture these furious, living heads and bring them back to their team’s plinth…if they can. Born from a love of old school multiplayer games like Micro Machines, Worms, and Street Fighter. We wanted to recreate the fun, fast-paced multiplayer experience of those games, while adding full 3D environments for more tactics, more depth, and more replayability.