It’s been a long time since we had a new race to have a ‘First Look’ at in Sid Meier’s Civilization VI, but now Firaxis and 2K have introduced Khmer as a playable race.  Khmer is ruled by Jayavarman VII was a Buddhist military leader who crowned himself king and rather than expand his domain chose to focus on improving what his subjects already had.  Watch the new first look video below for more information on Khmer… 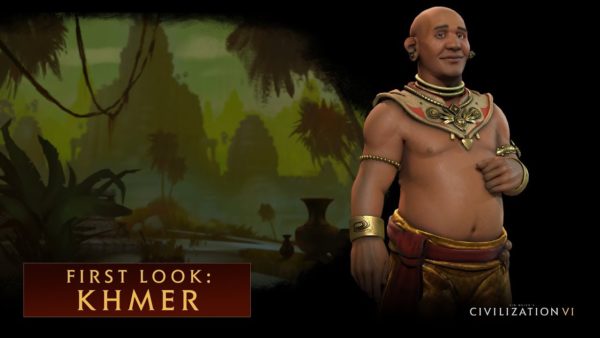 Khmer’s special ability is ‘Grand Barays’ and enables farms to provide additional food when built next to an aqueduct.  It also makes aqueducts provide both faith and an amenity.

Jayavarman VII’s unique ability is the ‘Monasteries of the king’.  This ability means that all holy sites will automatically take adjacent territory and will also provide food and housing when built on a river tile.

During war the Khmer can bring their big guns out onto the battlefield.  The Domrey are the Khmer’s unique unit and are war elephants with a huge ballista mounted on their backs. These have several advantages to catapults; firstly, they can move and shoot in the same turn, they are stronger than catapults and they also exert a zone of control.  This unit unlocks once Military Engineering Technology has been researched.

The unique building for the Khmer is the Prasat and replaces the temple.  The Prasat provides a Relic Great Work slot and also give all missionaries produced in it the Martyr promotion.

The Khmer are a great race for those wanting large populations.  Make use of rivers and aqueducts to get the best from this race in the first half of the game.