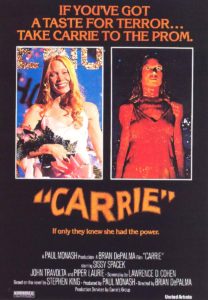 Carrie White is a shy teenager who endures a daily ritual of bullying from her classmates who torment her mercilessly at school, while also being subjective to repeated abuse from her religious fanatic of a mother. However, unbeknownst to everyone else, Carrie possesses telekinetic abilities which are rapidly growing in power, abilities that she ultimately unleashes to reap vengeance against the world that has long mocked and belittled her. 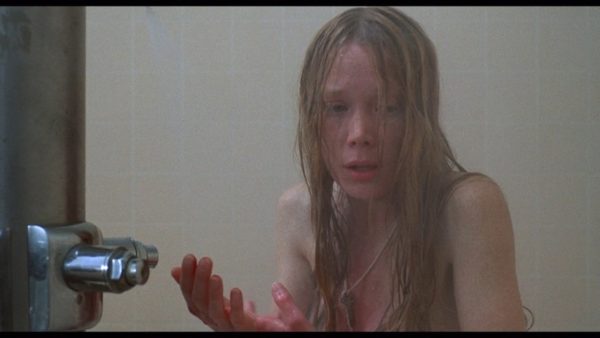 Did you know that Stephen King has had over 100 of his works adapted for film and television?

With a career as long and successful as King’s you’d expect that a few of his books and stories would have been made into films and TV shows, but over 100 is just unreal. I think only Shakespeare beats him in terms of screen adaptations.

So for today’s edition, we’re going back to where it all started with a look at the first ever Stephen King adaptation in the form the of Brian De Palma’s stylish Oscar-nominated classic Carrie.

Lonely and belittled by everyone around her, living a life seemingly devoid of any kind of happiness and desperate to simply be treated like a normal person, Carrie White is a truly tragic character.

Sissy Spacek’s haunting and moving (not to mention Oscar-nominated) performance as Carrie truly manages to capture the unending ordeal that her life is. Her disheveled appearance and the way she carries herself tells a story of a woman tormented by the world in a much more effective and subtle fashion than exposition ever could.

Sissy Spacek’s performance is simply incredible throughout, successfully creating a tragic character that is easy to root for. Even when Carrie finally snaps and commits the monstrous act of mass murder against her schoolmates, Spacek’s careful and tender performance up to that point ensures that we never feel like she is a monster, but instead only an unfortunate victim who has finally had enough of the torment. 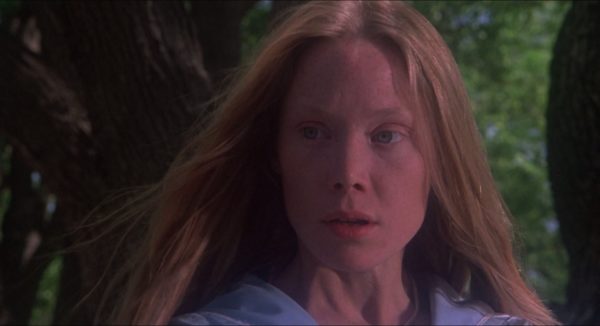 The wonderfully mental Piper Laurie gives a terrifying (also Oscar-nominated) performance as Margaret White, Carrie’s mother, a deluded religious fanatic and an abusive tyrant who is the real monster of the film.

Manically dishing out biblical scripture while dishing out a beating to her daughter, and with a crazed stare that makes the pee running down your legs go cold, Laurie excels at creating a fantastically over the top monster. One that you find yourself despising and cursing whenever she appears on-screen, but one that you find that you just can’t get enough of.

I also really want to give props to Nancy Allen’s performance as “popular girl” Chris Hargensen, the principal tormentor of Carrie.

Words cannot adequately describe the unbridled hatred that I felt for Allen in this film, with every moment she appears on the screen filling me with rage and leaving me spewing venom at the screen. I should stress that when I say that I mean it as a compliment to her performance, with Allen being possibly one of the greatest (and underrated) movie bullies ever.

I really can’t emphasise how angry Allen’s character made me. I was angry with her every utterance of unnecessary hatred against the innocent Carrie. I was angry about her bitching about being punished for bullying Carrie, acting like it’s she (Chris) who’s the poor victim and not Carrie.When she does finally get her comeuppance (taking a very young John Travolta with her) it’s incredibly satisfying although a bit too brief.

In short, Nancy Allen plays a right royal bitch a bit too well. 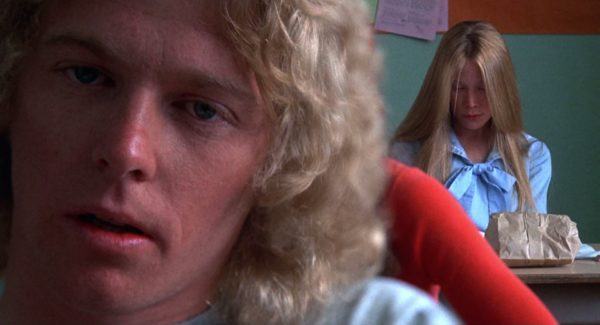 The film moves along at a brisk pace that’s bound to keep most viewers entertained, although there are more than a few parts that do feel like padding. Such as the overly long scene of Carrie’s bullies doing detention which feels like it’s only there so we can marvel at young women in tight shorts, or a scene which Tommy, Carrie’s prom date, and his friends go tuxedo shopping to the tune of what sounds like a duck trying to do disco. Because that’s what all horror films are missing; tuxedo shopping.

Also, it’s not a good sign for horror film when the most horrifying thing about it is having to look at the vomit inducing excuses for clothes that people wore in the 1970s. Truly a decade that taste and decency decided to take a holiday from.

While the film has the odd bit of padding that is somewhat annoying, the same cannot be said for the stylish direction of Brian De Palma.

The now classic prom scene is perhaps the best example of DePalma’s mastery of style, with the heavy use of slow motion and quick-cut editing when the bucket of pigs blood begins to wobble ever closer to dropping. I also applaud the use of minimal sound in the aftermath of the blood hitting Carrie, with the sounds of the blood dripping and Carrie’s panicked cries allowing the horror and embarrassment of the situation to really sink in. 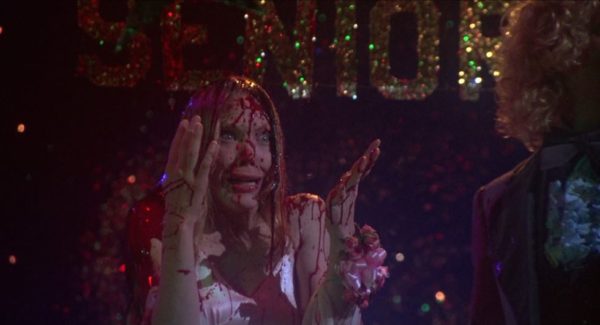 My personal favorite part of the scene though is when Carrie finally snaps and begins her rampage, with the lighting casting a stunning hellish red on her, with the screen splitting to show just how fucked her schoolmates are. It’s a brilliant scene in which De Palma masterfully builds the tension and anticipation to absolute bursting point before giving us an almighty pay off as Carrie unleashes her powers.

With excellent performances from Sissy Spacek and Piper Laurie and a performance from Nancy Allen that’s so good that I feel myself getting angry just writing about it, backed up with stylish and creative direction from Brian De Palma, Carrie while only the first of what would be many adaptations of Stephen King’s works, still ranks as easily one of the best.

Check this one out, otherwise “THEY’RE ALL GOING TO LAUGH AT YOU!!!”