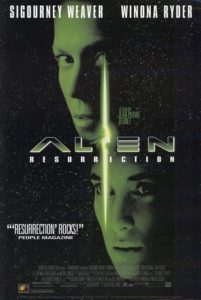 Aboard the ship USM Auriga, 200 years after her death, Ellen Ripley is resurrected via cloning, still impregnated with the alien queen that was with her when she died. The creature is subsequently removed for use in scientific and military experiments, spawning a whole new host of the acid-blooded creatures. Soon, the creatures escape their confines and begin to slaughter the crew, leaving the ship heading straight for Earth, with Ripley and a team of mercenaries on a desperate mission to escape and destroy the alien menace before it can reach the human homeworld. 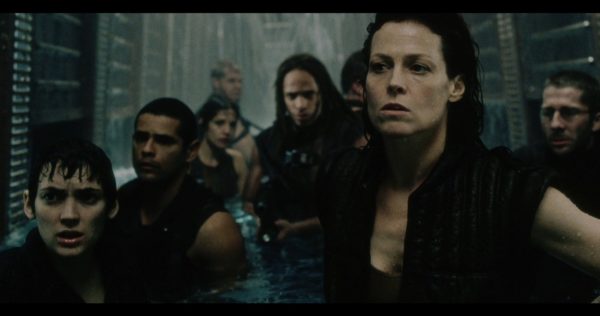 It’s that time of the week again when we take a look at yet another installment in the long-running Alien series and after four films and nearly 20 years, we finally reach the end of the story of Ellen Ripley and her battle with the acid-blooded monsters that have hounded her since 1979. This is Alien: Resurrection.

Alien: Resurrection is often held up, along with its predecessor Alien 3, as one of, if not the, worst entries in the original series of Alien films. Although I think that this notion is rather unfair and inaccurate, because, while like its predecessor, it’s not even close to the brilliance of the original Alien and Aliens, Alien: Resurrection is still an otherwise enjoyable entry in the franchise, and besides it’s certainly better than either of those Alien vs Predator turds.

Sigourney Weaver returns for her fourth (and likely final) appearance as series heroine Ellen Ripley, except she’s not really Ripley. In this case, our heroine is a clone of the late Nostromo crew member, created with a mix of human and alien DNA which gives this new Ripley acid blood and enhanced strength. 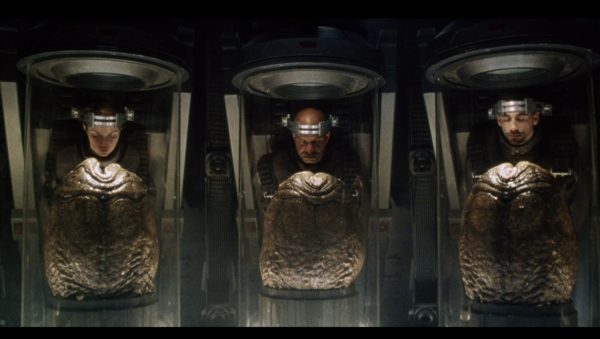 Weaver gives a much more enthusiastic performance than she did in the previous film, with her clearly having some fun with the changes made to the character, allowing her to add some welcome dashes of humour and sarcasm and seemingly playing the character a little tongue in cheek at times. Also, that basketball shot is pretty cool whichever way you look at it.

In the supporting cast, we have Winona Ryder as Cole, a youthful and seemingly perpetually annoyed engineer, gravelly voiced mercenary captain Michael Wincott and a very sleazy and creepy Brad Dourif (who is a hoot) as a mad scientist who seems to like the aliens a tad too much. The main issue with this film is that the cast is perhaps a little too busy, with it often being difficult to remember character names and often you find yourself not really caring too much when they are horribly killed off.

Although thankfully the always awesome Ron Perlman survives the film, giving a hilariously show-stealing performance as the short-tempered mercenary Johner, uttering many of the films funniest and most memorable lines. My personal favourite is “I’m not the mechanic here Ironside, I mostly just hurt people”. Plus I always get a kick out of seeing Perlman blast a spider’s web to hell. 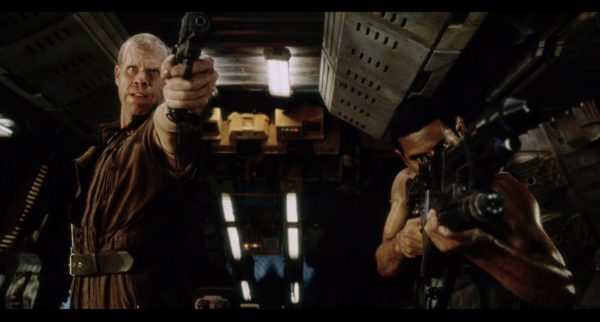 The general feeling I get with this film is something very different from the previous films; it’s not the heart-pounding terror of the first film, nor the action-packed thrills of the second and thankfully not the suicide-inducing misery that was the third film.

Instead, this film just feels like it really wasn’t supposed to be taken all that seriously, with it almost feeling like it was made with a slight tongue in cheek kind of atmosphere in mind. The best way I can describe it is to compare the film to a haunted house ride, you might get the odd scare or two but in the end, you’re really just there to have fun.

Even the violence which should be shocking and horrifying is done in such an over the top fashion (Resurrection is by far the goriest of the series) that far from reaching for the sick bucket, you find yourself laughing at the sheer absurdity of some of it. I mean come on, a man kills another man by having his chest burster explode through his head resulting in a shower of blood and brains. It’s absurd, not scary. 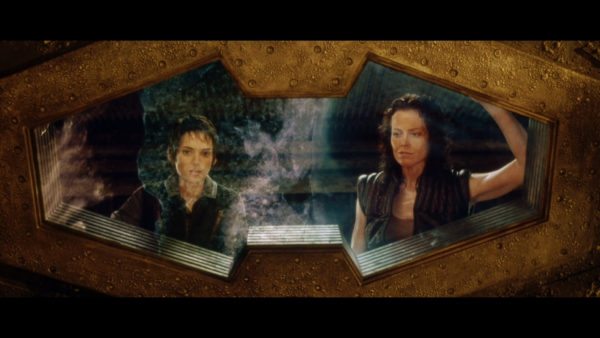 While it might not be anywhere close to being the best, its over the top, almost cartoonish, violence, some great show-stealing performances from Weaver and Perlman and a general sense of silliness, Alien: Resurrection is all round an enjoyable and fun closer to the original series that began in 1979.