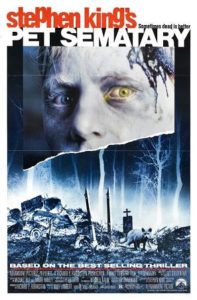 Upon moving to a new town, Louis Creed is introduced to the mysterious “Pet Sematary” that hides an ancient Native American burial ground behind it. A burial ground that allegedly possesses the power to resurrect the dead. Despite being warned not to, Louis finds himself drawn to use the power of the burial ground when tragedy strikes the family, unaware of the horrors that will be released. 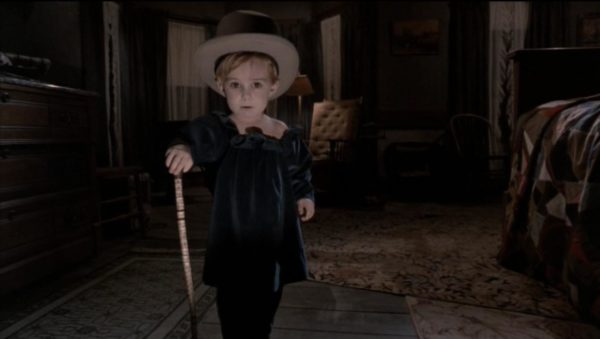 Stephen King needs no introduction. With over 50 novels, countless short stories and compilations to his name, the legendary horror scribe has been the source of many a nightmare and a soiled pair of underpants.

And with 2017 seeing something of a resurgence in the popularity of King’s work on both the big and small screen, I felt it only appropriate that with this year’s October Horrors that we take a look at a few previous screen adaptations of the work of the world’s favourite horror writer.

So let’s get this spooky train rolling with a look at the rather darkly quirky Pet Sematary.

I’d also like to give a big thank you to my Flickering colleague Rob James Kojder for suggesting this film. So please send your angry comments to Mr. Kojder. Sorry Rob.

Dale Midkiff (who does not show his midriff) makes an effective and sympathetic protagonist as Louis Creed, even if his delivery does venture into slightly wooden territory at times.

The second half when Louis goes half mad with grief and attempts to bury his dead son in the cursed burial ground, is when Midkiff really begins to shine, with the actor managing to effectively capture the tragic mental collapse as the madness begins to take hold, somehow making the viewer empathise with his rather morbid plan.

I also have to give credit to little Miko Hughes as Louis’s son Gage who, aside from being weapons-grade adorable also makes an effectively creepy monster in the films second half. That high-pitched laugh of his is enough to make urine decide to relocate to my feet.

My personal favorite performance belongs to Herman Munster himself, the late great Fred Gwynne, who in the role of Judd Crandell, injects a warm air of fatherly wisdom and humor to the proceedings.

I also love the wonderful rural Maine accent he performs the role with, lending itself to some very quirky pronunciations of certain words and phrases, such as “You doan’t wan go down that roaod” with it all being really quite funny and charming. Also, it’s great fun to try and mimic. Go on try it yourself. DO it.

However, it’s in the more serious moments when Judd tells the story of the burial grounds past where Gwynne truly shines, with his pitch-perfect delivery of these horrid stories creating an ominous and spooky atmosphere like greatest creepy campfire story of all time. It’s a moment that really makes you really you sit up and pay attention and you can certainly feel the hairs on your neck stand up when Gwynne utters the ominous mantra “Sometimes, dead is better”.

I first read the novel Pet Sematary back in high school and I can recall finding it to be a very enjoyable read, and a rather depressing one as well with it arguably being one of King’s darkest works. 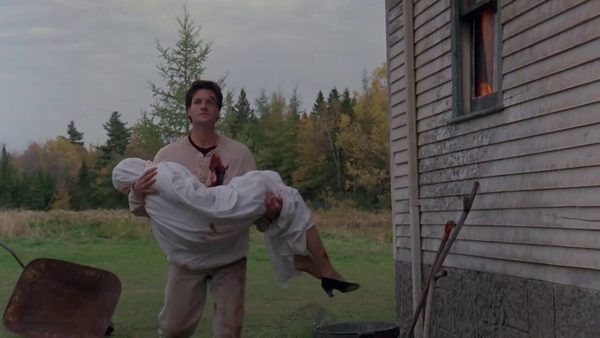 The film version (with a screenplay by King himself) manages to stay faithful to these dark core themes, albeit with a few changes here and there, allowing the translation from page to screen to flow smoothly, while also lightening the mood somewhat, with the film having a few fairly quirky and funny moments.

The problem with this slightly comic approach aspect though is I’m not entirely sure if this was an intentional.

Take the way the film treats the minor but important character Victor Pascow, a poor unfortunate soul who Louis first meets after the former has had a fatal disagreement with a truck.

In the novel, Pascow only reappears once to Louis in a dream warning him not to venture past the pet graveyard or face the usual certain doom, only getting a handful of mentions later in the book but never physically reappearing.

In the film though, Pascow reappears constantly and while the character’s bloodied and battered appearance is initially creepy, it soon devolves into accidental comedy when he tries to help Louis’s wife Rachael later in the film as she races to get home. Almost like the film’s turned into kind of supernatural road trip comedy.

Also, the film seems to turn the tragic figure of Louis Creed into something of a slapstick comedy master, with him tumbling down hills and battering his noggin at regular intervals. It’s all very funny stuff, but it sometimes undermines the films darker qualities, a good deal of which are genuinely upsetting.

Take the death of the young toddler Gage. When we see that truck barreling towards him as he chases a kite it’s a terrifying moment that brings to life the worst fear many of us have when we see kids near roads. We find ourselves pleading for his dad to catch up to him, hoping that he’ll grab him from the road in the and that everything will be alright.

The scene is a master stroke in the way it spares us a grisly image. However, it’s what we hear that’s far more horrifying than what we see, with the sound of the truck hitting the poor child being truly horrific. And then we see the image of the little-bloodied shoe dropping to the ground and hear his father scream.

It’s a moment like this where the film shines as it manages to tap into some kind of primal aspect of the viewer giving us an unseen image that is far more horrifying and nightmarish than any cinematic monster. The mental image of a dead child.

And do I really need to say anything about Zelda, a character whose grotesque appearance will almost certainly give you nightmares. It certainly kept me from sleeping soundly.

Pet Sematary might not be the best of Stephen King adaptations but it’s still one that’s worth checking out. While it sometimes veers into accidental comedy, the nightmarish premise of grief gone mad and its solid acting make the film a decently spooky watch.

Also, it does have a kick-ass theme song by The Ramones.

All together now ““I don’t wanna be buried in THE PET… SEMA-TARY” (I am so sorry).