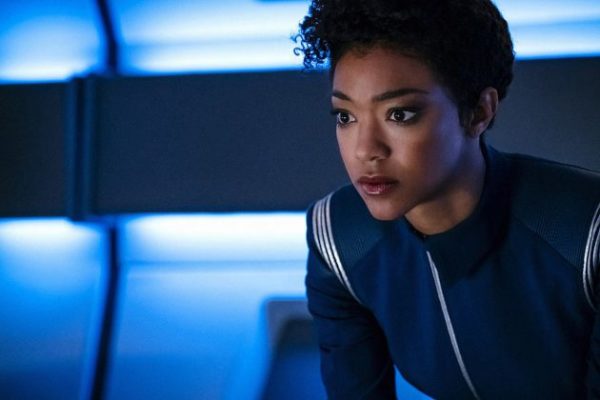 What did you think would happen when you bumped into someone who didn’t want you in their front yard?

This episode, I think – though I don’t know for certain – has the lowest screentime for Michael Burnham so far. That’s not to say she’s unimportant here; she’s not, and still has a fairly pivotal role in the plot. Rather, this episode widens its focus to the rest of the ensemble beyond Burnham in a way that the show hasn’t really so far; most obviously, for example, was Stamets plugging himself into the spore drive while Burnham was confined to quarters, effectively removing her from the episode’s resolution. It’s not difficult to imagine a previous episode putting Burnham herself in this role – certainly, that’s what I expected as soon as the possibility of humans controlling the spore drive was raised.

Here, in any case, we learn a fair amount about each of the different characters. Stamets and Dr Culber are a couple. Saru is insecure about his command, and fears he’ll be an ineffectual captain. Most interestingly, Lorca killed his previous crew in an act of perceived mercy, intending to save them from torture at the hands of the Klingons.

Nonetheless, though, there’s something a little… perfunctory about it all. The character work still feels quite thin, which isn’t great at this stage; while we’re getting to know more about the characters, it’s more in terms of detail rather than substance. Perhaps the most interesting piece of character work from this episode was Burnham’s comment that now, without much work to focus on, she’s being forced to confront her lingering emotional issues; unfortunately, the show didn’t delve into it particularly, losing out on this subtler character work.

It’s functional, certainly, albeit perhaps lacking in both style and substance. There’s just enough here to sustain the episode – though, really, that feels a little like treading water. Hopefully as the series continues, there will be a little more nuance to each character. 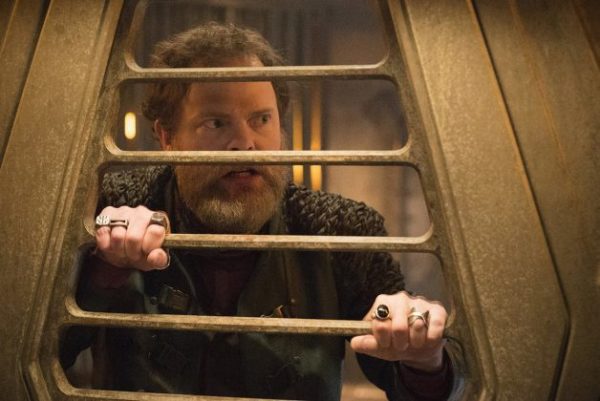 The question of continuity is one worth addressing here, with another episode that’s drenched in references to Star Trek’s history. It ranges from the small and inobtrusive – little nods in the dialogue, citing Jonathan Archer, Robert April and so on – to the more central in the shape of Harry Mudd.

How much continuity is too much? The answer, of course, is the point at which it becomes alienating to new viewers – the point at which it’s so suffocating and self-reflexive that it’s offputting. That’s not to say there isn’t a value in developing a mythos, or a certain glee to alluding to wider continuity, but there’s a need to make sure it’s not overpowering. Star Trek: Discovery is managing to stay on the right side of the line – for now – but it’d perhaps do well to ask itself this question more often. At the moment, it’s got it just about right; those who know will enjoy the nods to Matthew Decker or Christopher Pike, while those who don’t won’t be confused or taken out of it by reference to the Daystrom Institute. (Indeed, it’s often the more dedicated fans who do understand these allusions that are more likely to get tied into knots about it!)

There’s an addendum to the above, though, which Discovery is running risk of falling foul of: Just what does the continuity add? ‘Choose Your Pain’ is an episode worth interrogating on this note, given the inclusion of Harcourt Fenton Mudd. Mudd is a fan favourite character, albeit one I’ve never really understood the appeal of – he’s a human trafficker played for laughs, from some particularly poor episodes of The Original Series. Was he a necessary inclusion? Was there anything about his plot function that demanded he be Harry Mudd, rather than an original character in a similar vein? Admittedly, it might be too early to say; we know that Mudd is set to return later in the series, so it’s possible that in hindsight this appearance will prove to be important set up for a story that does demand his inclusion. Otherwise? I’m less than convinced.

Continuity must serve the story, rather than vice versa. That above all has to be the rule, and it’s a rule that Discovery has flaunted at times. 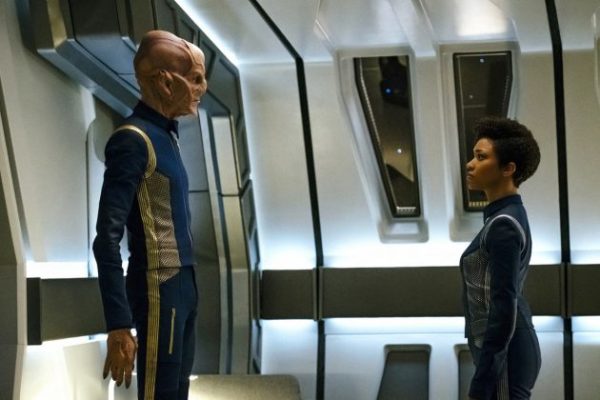 This episode introduces Lt. Ash Tyler; a Starfleet prisoner of war, held by the Klingons since the Battle at the Binary Stars. Certainly, the character has potential – it’s an interesting approach from which to examine Starfleet in war, as well as a way to remind the Discovery crew just what they’re risking.

Having said that, though, across the course of the episode I grew increasingly convinced that Tyler isn’t what he seems – I’m now quite certain that Tyler is in fact Voq in disguise. Voq was conspicuously absent this week; in light of the conclusion of last week’s episode, wherein he was sent to learn from a group of Klingon spies and secret keepers, it does beg the question of just where he was.

Shazad Latif, who plays Ash Tyler, was originally cast as the Klingon Kol – that’s the one who usurped Voq as leader of the Klingons in episode 4. In a shakeup that was announced back in April, Kol was recast, now portrayed by one Kenneth Mitchell, while Shazad Latif took on the role of Ash Tyler. While this would still have been reasonably early in the production process, we can reliably assume that there would have been some makeup tests and perhaps Klingon prosthetics developed for Shazad Latif.

Voq is played by one Javid Iqbal. This is interesting in and of itself, because – well, because it seems like he doesn’t actually exist.

A quick google search for the name doesn’t yield much; it appears that the actor’s only role so far is in Star Trek: Discovery¸ the sole credit on a fairly sparse IMDb page that doesn’t even have any pictures of Iqbal outside of his Klingon makeup. (While there is another Javid Iqbal on IMDb, it’s quite direct in noting that he’s not the same actor as the Javid Iqbal in Discovery.) Similarly, while the cast of Discovery have all been active on social media and at promotional events to publicise the show, there’s not been a single appearance from Javid Iqbal – who, interestingly enough, hasn’t been credited in the title sequence while Shazad Latif has.

It strikes me as quite likely, then, that we should anticipate the revelation that Ash Tyler is in fact Voq in disguise; certainly, Lorca’s accusation that he was lying feels like foreshadowing in hindsight. I’d argue too that Voq bears enough of a similarity to Ash Tyler to be Shazad Latif under heavy makeup, but I’ll grant that’s a lot more difficult to say.

Ultimately, ‘Choose Your Pain’ was an improvement over last week’s offering; it’s perhaps not as impressive as Discovery’s debut, but it’s reassuring for the series to reclaim lost ground. Hopefully, subsequent instalments will improve once more, reaching more inspiring heights than “rather good”.