Awesomenauts fans get ready for the Cirque Du Brawlee is in town thanks to update 4.4.  This awesome new update introduces lots of new features that will mix up the gameplay such as the addition of a weekly Brawl that will provide bonus XP and Awesomepoints rewards to anyone who takes part.  Check out the videos below to see what this update entails. 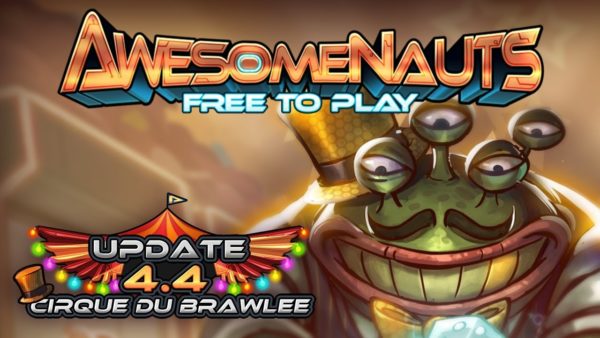 As well as the weekly Brawl, Update 4.4 will introduce a new gameplay mode every weekend that has different rules, powers and modifiers with this weekend starting with the Unlimited Power Brawl.  This mode will put a fixed price on all upgrades with no restriction on the amount of upgrades a character can have.

Update 4.4 will also introduce Daily Missions that challenge players to complete certain objectives such as to complete a set amount of matches with a specific type of character or win so many battles.  Players who complete these objectives will be rewarded with Awesomepoints that can be used to purchase characters and cosmetics.

The Cirque Du Brawlee update has also introduced a new feature for newcomers to the game which help predict the effectiveness of their abilities, it will also bring a set of daily missions to help players utilise the game’s features to the max.