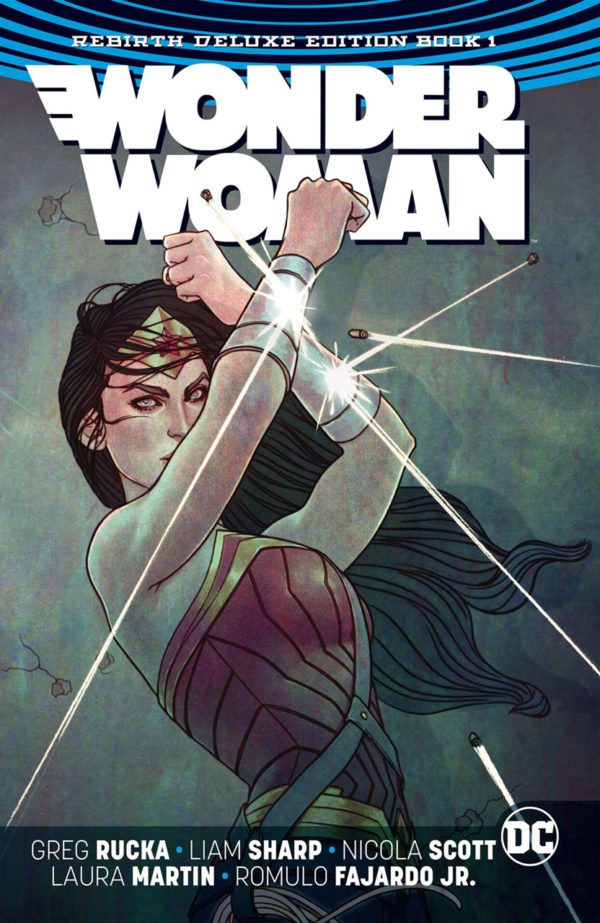 One of the most consistently enjoyable titles of DC’s Rebirth initiative was Wonder Woman, with Greg Rucka returning to the title after a very successful and beloved run in the mid-00s. Rucka’s latest story featured Diana on the hunt for the truth after discovering her past and memories had been altered, creating a modern origin for her along the way. Wonder Woman: The Rebirth Deluxe Edition Book 1 collects the first half of Rucka’s new run, alternating between the past and present in a compelling and introspective tale.

Rucka’s characterization of Wonder Woman captures the essence of the character in both timelines. Much like how they were presented in single issue format, the book alternates between Wonder Woman as a seasoned warrior and a youthful girl who enters man’s world for the first time. This could have been a bit jarring, but Rucka handles the changes nicely and the book doesn’t miss a beat when it goes from the present day to the past. Even the chapters end with appropriate cliffhangers that don’t interrupting the story’s flow in a negative way.

‘The Lies’, the modern day portion, is a pretty entertaining story of Diana going on a journey to discover who and what is responsible for her changed memories. To do this, she teams up with one of her arch-enemies, the Cheetah, to discover the truth. There’s some pretty interesting development between them as they reflect on their rivalry and former friendship. Cheetah comes across as a very sympathetic and tragic character as more is learnt on what happened to her and how Diana still sees something good in her to redeem.

‘The Lies’, as well as ‘Year One’, also examines Diana’s relationship with Steve Trevor. Their relationship was rather complicated in The New 52, especially once she started dating Superman. That decision proved to be a controversial one among fans, but Rucka tackles this head-on later in the book and gives a bit of retroactive reasoning as to why Diana felt that way towards Superman and why, in a bit of a meta moment, it didn’t feel right.

The other part of the story, ‘Year One’, is arguably more of a draw to this book than ‘The Lies’. Much like the feature film this past summer, Diana leaves Themyscira after Steve crash lands on their shores and embarks on a mission to discover a source of evil within the world that proves to be the god of war, Ares. While some might say that’s treading familiar ground, both with the film and with the opening story to George Perez’s run in DC’s reboot from the 80s, Rucka manages to find new ways to put fresh spins on these familiar beats while giving some great portrayals of the characters. The language barrier that exists between Diana, Steve and the rest is played with a lot, but gives a good chance for the characters to grow using very little dialogue between them.

Where Diana is an experienced superhero in ‘The Lies’, Rucka conveys her youthfulness and idealism throughout ‘Year One’ in a great and enlightening way. Diana is very charismatic and her friendship with both Steve and Barbara Ann before her Cheetah days is very believable. She also makes the leap from fish out of water to superhero easily and in a great manner in one of the book’s highlighting moments.

The art in Wonder Woman is simply awesome too. Liam Sharp illustrates on ‘The Lies’ while Nicola Scott does so for ‘Year One’. Both have very different styles, but the artwork in their stories are excellent. Sharp captures the moody atmosphere of Wonder Woman’s journey throughout the jungle and his rendition of Cheetah is great to look at. There is so much detail in his Cheetah, particularly in her facial expressions, that make the villain stand out even more. Wonder Woman herself is greatly detailed, showing just how much she’s seen and changed over the years compared to ‘Year One’.

Nicola Scott’s style is a little more animated than Sharp’s, but she captures the youthfulness of Diana’s character very well. Everything in ‘Year One’ is bright and colourful to match Diana’s discovery of the world, but it still fits with the overall tone of the book. Scott’s facial expressions also stand out and she has a very good sense of how to display the action scenes. Whether its Diana defending a young child from gunfire or battling Ares, Scott’s art excels during the action beats in detail, colour and emotion.

Both ‘The Lies’ and ‘Year One’ tie together nicely as more is discovered about Diana’s’ true’  past. Rucka nails the characterization of the characters in both timelines while Sharp and Scott’s art is gorgeous from start to finish. Wonder Woman: The Rebirth Deluxe Edition Book 1 contains the Wonder Woman: Rebirth special, Wonder Woman #1 – 14 and includes a cover gallery and a small collection of sketches from Sharp and Scott (it would have been nice to see a bit more of their preliminary work). Its a nice, hefty book, but one that will make Wonder Woman fans very happy.